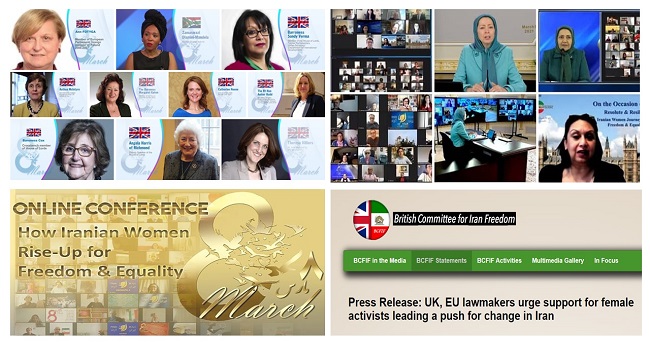 On International Women’s Day, the Women’s Committee of the National Council of Resistance of Iran (NCRI), held a virtual conference. The event brought together Iranian feminist activists and politicians from the United Kingdom and other European countries to highlight the Islamic Republic’s systemic violation of women’s rights, as well as a range of other issues.

Several attendees brought the signatures of EU, UK, and U.S. representatives, and some were also affiliated with non-governmental organizations working on Iranian matters, such as the International Committee in Search of Justice (ISJ). They were published in reaction to Assadollah Assadi case, a high-ranking Iranian diplomat that was found guilty of terrorism in a Belgian Federal Court.

The Assadi case was outlined in an ISJ statement signed by more than 20 former government ministers from across Europe, “the scope of crime requires that the European Union reviews its approach to Iran.”

It highlighted that during the trial, Belgian prosecutors made it clear that the terrorist-diplomat was not behaving on his own initiative, but had been directed by high-ranking Iranian officials to target the NCRI on European soil.

The statement outlined, “the activities of Iran’s embassies, religious and cultural centers need to be scrutinized, and the diplomatic relations with Iran need to be downgraded.”

It went further to state that any return to normal relations and development of economic relations should be conditional on the Iranian regime making verifiable improvements in actions, such as dismantling its terrorist networks and pledging never to carry out another plot on Foreign lands.

This statement represents not only a moral obligation to Western security but also to the Iranian citizens and their families living overseas, who would have been the target of the 2018 attack.

Anthea McIntyre, a British Member of the European Parliament from 2004 to 2019, was one of the speakers. “I find it sickening to see European officials pursuing trade relations, appeasing mullahs, and ignoring their human rights abuses, especially against women,” she said in the virtual audience.

If the killings in January 2018 or the terror attack following June had evoked a severe response from the EU, there is no doubt that Tehran would have reconsidered its plans to crush the rebellion in November 2019.

However, since the European response had been so weak, the government decided to radically intensify its repression. The Islamic Revolutionary Guard Corps (IRGC) was ordered by the regime’s Supreme Leader Ali Khamenei to use deadly force against crowds, and the subsequent shootings resulted in about 1,500 deaths.

Even then, to the Iranian people’s credit, their demands for a free and democratic future in Iran were not silenced. Many were back in the streets two months later, denouncing the same Revolutionary Guards for shooting down a civilian airliner with a missile strike.

Such activists’ bravery contrasts sharply with European leaders’ irresponsibility in engaging the Iranian regime in trade discussions while ignoring threats to their own civilians and massacres of foreign populations, including those in Yemen, Syria, and Iraq.