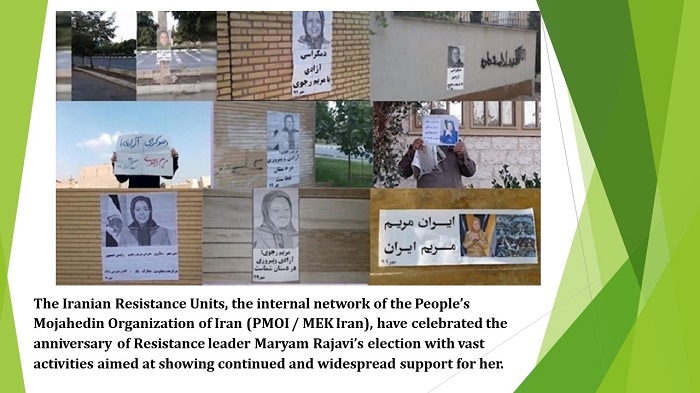 The MEK Resistance Units, the internal network of the People’s Mojahedin Organization of Iran (PMOI / MEK Iran), have celebrated the anniversary of Resistance leader Maryam Rajavi’s election with vast activities aimed at showing continued and widespread support for her.

Supporters of the Iranian opposition #PMOI/#MEK across Iran are celebrating the anniversary of @Maryam_Rajavi’s election as President of the National Council of Resistance of Iran (#NCRI).
#IStandWithMaryamRajavi #FreeIran #MaryamRajavi pic.twitter.com/jMkToR0z38

They also attacked the suppressive centers of the regime, including Basij bases in Andimeshk, Gonabad, Isfahan, and Mashhad, because the Basij – a branch of the terrorist designated Revolutionary Guard (IRGC) – are the most reviled suppressive force in Iran.

Notably, all of this brave anti-regime action was completed under a massively intensified security presence, created because the regime fears small acts of resistance growing into widespread rebellion. The mullahs have been openly humiliating and psychologically torturing people in the streets in order to suppress the general population, so this shows just how angry the people are.

“Iran will be free” – #PMOI/#MEK Resistance Units expanding their activities
In commemoration of the 25th anniversary of the election of @Maryam_Rajavi as President of the Resistance a number of brave Iranian women congratulated.#IStandWithMaryamRajavi pic.twitter.com/p6agtkFuUP

Rajavi was elected as President of the Iranian opposition coalition the National Council of Resistance of Iran (NCRI) during its plenary session on October 22, 1993. Since then, she has led a global movement to increase support for the Iranian Resistance, NCRI and (PMOI / MEK Iran), and convince national governments to withdraw support for the Iranian regime because of its terrorism, human rights abuses, and interference in the Middle East.

Many prominent politicians, intelligence chiefs, and dignitaries from around the world now support the (PMOI / MEK Iran), which helped get the group transferred to Albania in 2016, away from the most vicious attacks by the mullahs and their proxies in Iraq.

Oct 22, 1993, is the day @Maryam_Rajavi was elected as the President-elect for the transitional gov't after the Iranian regime’s overthrow.

Regime officials have taken incredible measures, from bombings to executions to kidnapping relatives to propaganda, in order to stop the Iranian Resistance, NCRI and (PMOI / MEK Iran), and stop Iranians from joining them but this has not been possible. Goodwill eventually triumphs over evil.