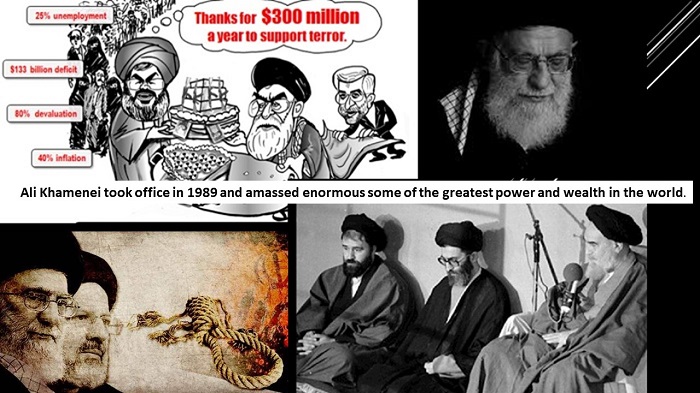 The Supreme Leader of Iran, Ali Khamenei took office in 1989 and amassed enormous some of the greatest power and wealth in the world. As Supreme Leader, he takes the ultimate responsibility for all of the atrocities and violations of human rights that have been committed by the regime in his 21 years of leadership. He has had the final say in countless deaths and the economic destruction of Iran. It is important to question, how did one man obtain this level of power?

Khamenei was born on 19 April 1939 in Mashhad, northeast Iran. He studied at the Dianati School in his hometown and developed an interest in politics in his early twenties, in the monarchic era of the Shah’s rule. Khamenei was even arrested by the state’s security forces for his relations with the resistance movement, including the People’s Mojahedin Organization of Iran (PMOI / MEK Iran).

This relationship was not to last, as Khamenei’s fundamentalist beliefs and support for the Islamic Republic founder, former Supreme Leader Ruhollah Khomeini, separated him from the (PMOI / MEK Iran). However, he was associated with the (PMOI / MEK Iran) right until the early months of the 1979 revolution.

Who is Ali Khamenei, the supreme leader of Iran’s regime?The Supreme Leaders office manages numerous security, economic, and political institutions. Khamenei benefits enormously financially from these institutions and is estimated to be worth close to $200 billion. #MEK #Iran pic.twitter.com/FTNDfoG05N

Khamenei was a co-founder of the Islamic Republic Party; the main party that has held power in Iran for over four decades. He has held several different political positions over his rules, such as Friday prayers Imam in Tehran and Khomeini’s representative in the Supreme Defence Council. In a sham election, he was also appointed as the Islamic Republic President by Khomeini in reward for his loyalty.

Upon the death of former Supreme Leader Khomeini, the second-in-command Hossein-Ali Montazeri was to be appointed as Khomeini’s successor. However, he was cast out for speaking out against the regime’s 1988 massacre of political prisoners. Khamenei was instead promoted to Supreme Leader by, then Parliament Speaker, Akbar Hashemi Rafsanjani. While in his role as Supreme Leader, he has also been the commander-in-chief of Iran’s Armed Forces for the last 30 years.

The totalitarian nature of Khamenei’s authority has allowed him to use the most extreme forces of suppression on Iranian society. Under Khamenei’s rule, dissidents have been tortured, imprisoned, and even sentenced to death, and religious and ethnic minorities, as well as women, face the greatest oppression by the regime.

Anyone who attempts to defy Khamenei’s theocratic order may be subject to violent suppression, as demonstrated by his treatment of the 2018 and 2019 uprisings in Iran, among many others. Protestors who were calling for regime change were arrested, tortured, and met with lethal force from the Islamic Revolutionary Guard Corps (IRGC).

Khamenei ordered the IRGC, on 17 November 2019, to “do whatever it takes to end protests.” Subsequently, the regime’s forces killed at least 1,500 defenseless protestors, using snipers from rooftops, helicopters, and machine gunfire. Reuters confirmed in a special report on December 23, 2019, about the deadly crackdown on November nationwide protests in Iran the death toll of 1500 that was announced by the People’s Mojahedin Organization of Iran (PMOI / MEK Iran) on December 15, 2019.

A recent example of this was the foiled terrorist plot to bomb the National Council of Resistance of Iran, (PMOI / MEK Iran) and (NCRI) annual resistance gathering in June 2018. This is attended by thousands of supporters of the Iranian resistance, including hundreds of international dignitaries, and could have caused devastation were it to have been successful. European law enforcement was able to arrest the regime’s agents orchestrating the plot, including a senior Iranian diplomat, Assadollah Assadi. Assadi and his three accomplices are now awaiting trial in Belgium, the first time a senior Iranian diplomat will be sentenced in a European court.

The US embassy in Baghdad estimated in 2018 that Khamenei has a personal wealth of around $200 billion, with control over many security, political, and economic institutions. This includes the Mostazafan Foundation and the Execution of Imam Khomeini’s Order.  Many are under the guise of being foundations to serve the Iranian people, while Khamenei directly reaps their profits.

Official reports show that 80 percent of Iranian people under Khamenei’s rule live below the poverty line, while the top 4 percent of the Iranian population holds wealth that is equal to the rest of the whole population. A common chant at resistance protests is: “The nation begs for food; the Supreme Leader lives like God.”

Khamenei’s succession and a fractured regime

Khamenei is now 81 years old and his health has been in a state of deterioration for quite some time. This has caused him to be absent from some traditional ceremonies, such as Eid al-Adha. He also underwent prostate surgery in September 2014.

There is now much speculation as to who will be Khamenei’s successor and political rivalries have formed in this regard, with reports of infighting splintering the regime. A potential successor could be judiciary chief Ebrahim Raisi, who was a key figure in the 1988 massacre of tens of thousands of political prisoners.

The Supreme Leader’s office, under the supervision of Khamenei and his son eldest Mojtaba, is an entity that oversees dozens of security, political, and economic institutions. Khamenei’s wealth is estimated to be close to $200 billion.#MEK #Iran pic.twitter.com/njyraojDwZ

The fractures and ambiguities caused by Khamenei’s succession have weakened the regime and Khamenei’s power. The death of Khamenei will affect all areas of his religious dictatorship, from social to economic and political factors. The regime fears the power of the Iranian people, particularly following the 2018 and 2019 uprisings. Further instability for the regime is on the horizon, as the Iranian resistance movement grows in following and the end of Khamenei’s reign approaches. The entire ruling system in Iran is threatened by democratic resistance.