Protests that erupted across Iran in mid-November herald a new era for the country. This era can be observed by any commentator, regardless of political orientation. Sociologists, political scientists, and political elites, on the one hand, and security apparatus and analysts, on the other hand, examine the context and consequences of recent mass protests.

The December 2017 protests in Iran were sparked by hardliners in Mashhad. The demonstrations began due to a stagnant economy, high levels of inflation, unemployment, and inequality. But that wasn’t the entire story.

The protests were not just about economic problems and it turned out that the corrupt government system cannot be reformed from inside. The people made it clear that they consider the system illegitimate in its entirety.

The December 2017 protests were answered by severe repression. Government commentators also provided a security analysis and referred the issue to the People's Mojahedin Organization of Iran PMOI/MEK’s activities inside the country. This was a reality that the regime could not conceal.

Current statistics and the situation show that social gaps and backgrounds of corruption have not only stayed strong but have been exacerbated ever since. Step by step, the income gap in the community widened and public purchasing power decreased.

In the closing hours of Thursday, November 14, the government announced suddenly that gasoline would be rationed beginning on Friday, November 15.

The confusion over the fuel card and how to use it and the high cost and destructive effects of rising gasoline prices have become a major concern for people.

Protest rallies began in Iran on Friday, and demonstrations expanded from city to city.

The country is being rocked by its biggest wave of protests in nearly a decade. Since November 15, tens of thousands of Iranians have taken to the streets in many towns and cities to demand freedom from their theocratic government. At least 300 people have since been killed in clashes with security forces, and 10,000, mostly young people, have been arrested, per news reports.

The repressive measures of the regime indicate its weakness and fear of collapse. No stable state that has popular support among the people would resort to such killing. But the slaughter of the protesters will not result in the people despairing from overthrowing the regime. On the contrary, it will further intensify protests in the future.

In all the cities where protests took place, banks were fuel for the fire. The protesters destroyed and burnt many banks across Iran. But why did banks become the target of the people’s rage?

On the day of the incident, the angry youth and people of Iran torched the banks because they were fed up with discrimination, injustice, corruption and the inefficiency of the regime’s banking and financial system. The burnt banks strewn across Iran are the impoverished people’s response to the Islamic Republic’s corruption. 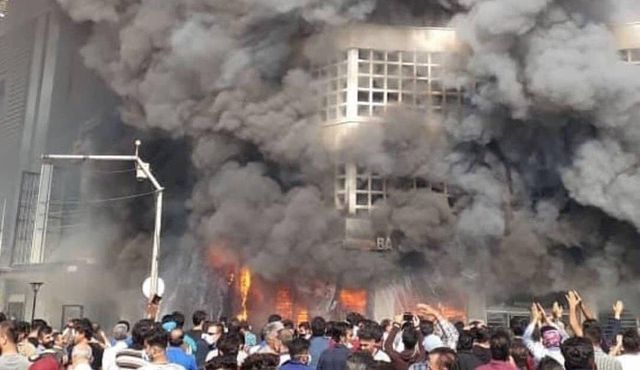 Prior to the protests, every day, the people of Iran heard about the families of the ruling elite getting billions of tomans’ worth of loans and never returning them. These huge banking loans and the corruption among plaguing regime officials and IRGC commanders further added salt to the wounds of the Iranian people. In the past four years, there has been an unprecedented wave of protests by creditors and customers of the financial and banking systems who have seen their investments and wealth plundered by the regime.

Iranian citizens had been experiencing injustice and discrimination every day. They knew that in the face of the regime’s banking rules, they will not be given equal opportunities in comparison to the elite. They also knew that no regime official or parliament member would have the will to change the situation because they are all part and parcel of this corrupt system.

How the uprising took shape

The recent uprising has caused a deep fear among the security authorities of the Iranian regime. In the past 10 days, many officials have referred to the role of the sole organized alternative of the regime as the main element and cause behind the protests.

On Saturday, November 23, state-run IRNA news agency quoted a security expert, saying, “Along with Tehran, Isfahan, Tabriz and Ahvaz, Shiraz saw the most movements by protesters and peopled linked with the People’s Mojahedin Organization.” The news outlet stated that “with the efforts of security forces” and after “arresting the main leaders of the protests, linked with the MEK,” control was restored in the city.

Rasoul Falahati, the representative of Khamenei in Gilan and the Friday prayer leader of Rasht, described the protesters as “the children of MEK’s executed members.”

Javad Javadnia, the deputy of cyberspace in the prosecutor’s office said on Saturday, “Our main frontline in cyberspace. The enemy is in a battle formation and is training [its forces] against the system. During recent unrest, three headquarters of the MEK in Albania was active in leading the protests.”

There are many similar remarks. Nonetheless, a notable fact is the leading role of fed-up youth in the current situation. The role of the MEK in shaping the uprising is undeniable. In any battle, the center where key decisions take place has a decisive role. Thanks to two years of activities by the supporters of the MEK and the rebellious youth inside Iran, an organic link has been established between the body and the head of the uprisings. And we are now seeing this relation bear fruit in the uprisings that have shaken the ground beneath the feet of the mullahs.

A hard lesson for the Iranian regime

The most bitter incident for the Iranian regime was its incapacity to contain the rage of the rebellious youth inside Iran while it was exuding power across the region and its so-called “Shiite crescent.” The regime inevitably resorted to firearms and opened fire on the youth to ensure its survival.

In this respect, we can conclude that the roots of the unrest have not been destroyed. Therefore, in the future, we will see the protests grow in quality and quantity.

The face of Iran has changed forever, and the overthrow of the corrupt rule of the Islamic Republic will usher in a new era for the people of Iran.

#Iran The death toll is at least 300, and the names of 99 of them have been obtained and verified by the Iranian Resistance. Two more women have been reported killed during the recent Iran protests. https://t.co/ogbsygACl4