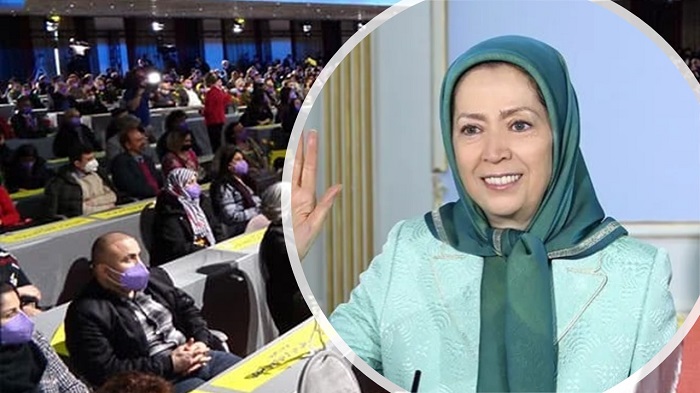 On March 5, 2022, the NCRI Women’s Committee hosted an international conference in Berlin to commemorate International Women’s Day. “Women, Force for Change in Iran, Global Peace and Security,” was the theme of the event.

The Berlin meeting was linked to a gathering in Ashraf-3, Albania, and hundreds of other sites across the world through the internet. Over 170 political figures from 37 nations attended the meeting, with some speaking or sending words of solidarity for Iranian women’s battle for freedom and equality.

Hundreds of Iranian women, including members of Iran’s Resistance Units, transmitted video messages to the International Women’s Day event in Berlin. The meeting also served as a platform for international solidarity with Ukrainian women who are fighting valiantly to defend their country against aggression.

This year’s International Women’s Day was dubbed “the day of Ukrainian women’s resistance” by the National Council of Resistance of Iran (NCRI) President-elect.

When two members of Ukraine’s parliament arrived to the conference from their shelters to speak to the crowd, they were greeted with a violent reception.

“In these days, our emotions and hearts are specifically with the people of Ukraine, especially the brave women in Ukraine who have taken up arms and are defending their homeland,” Mrs. Sarvnaz Chitsaz, Chair of the Women’s Committee of the NCRI, said in her brief opening remarks.

Despite the violent persecution of women in Iran, Ms. Chitsaz mentioned the active engagement of Iranian women in all rallies and uprisings in another portion of her speech. “Every day, more women join the ranks of the Resistance Units,” she stated. Without a question, regime change is now closer than it has ever been. Tomorrow’s Iran will certainly be a free Iran, based on the ideal of equality. This is the true spirit of March 8.”

On this evening of international solidarity with the women of Iran, many famous women’s rights campaigners, former politicians, and personalities spoke.

“You are our inspiration,” Helle Thorning Schmidt, Prime Minister of Denmark (2011-2015), said of the NCRI and its President-elect, Maryam Rajavi. ” Your fight will not only change Iran but will inspire women around the world. Your country will embark on a new era. You will be an inspiration to women all throughout the world. The power of women is great. Female empowerment is feared by misogynist leaders.”

“In Iran, women and girls are the primary targets of the sexist machine. Women in Iran have refused to surrender to the authorities. They have transformed into a force for change in Iran, knowing that their rights will only be realized if the country undergoes political upheaval. Iran’s women take part in the fight for freedom. This is a one-of-a-kind engagement not only in Iran but in the entire world.”

.@ZelenskyyUa
Let us call this year’s International Women’s Day, the Day of Resistance by the women of #Ukraine#IWD2022 https://t.co/rwxMjdwFAl

The next speaker was Urka Baovnik Jana, the Slovenian Prime Minister’s wife. Mrs. Jana, who is a major supporter of the Iranian Resistance, stated: “As a Muslim woman, Maryam (Rajavi) has had to face immense political, social, cultural, and intellectual hurdles posed by Iran’s ruling dictatorship.” Maryam’s boldness and devotion to empowering Iranian women are admirable. Women have risen to take major positions in the Iranian Resistance movement under Maryam’s leadership.”

The next speaker was Dr. Professor Rita Süssmuth, who served as Speaker of the German Bundestag from 1988 until 1998. She emphasized, “I almost cry when I think about the things those Iranian women are going through. This can’t go on like this. We must speak up both inside and outside of the legislature. We are all part of one, and in unity with men. Iran is a well-developed nation. It’s evident in the Iranian women, as well as the women in Ashraf. They made it through the dictatorship. They weren’t frail. Suffering can lead to fresh energy.”

Resisting & persisting in this Resistance give credibility to a nation’s raison d’ȇtre. It is the secret to its progress and victory in the most difficult circumstances. It is the only bridge through which one could reach a world based on fraternity, liberty, & equality#IWD2022 pic.twitter.com/XiMm79LznK