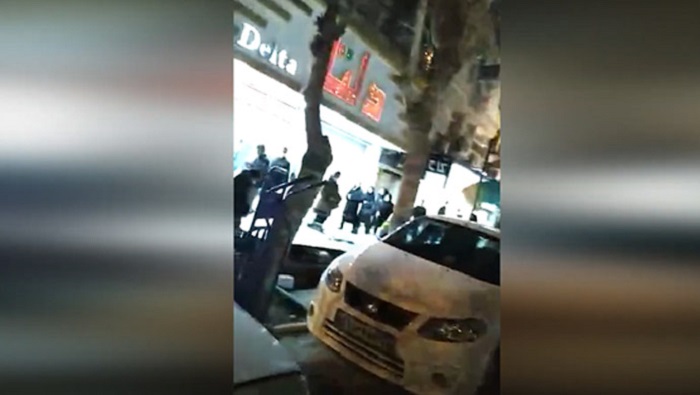 Members of the Resistance Units, an increasing network of heroic Iranians affiliated with the opposition People’s Mojahedin of Iran (PMOI/MEK), continue their current anti-regime campaign, this time in Kermanshah, western Iran, by playing the following slogans in the busy Vali Asr Street:

“Death to oppressors! Be it the Shah or [Khamenei]!”

“The only path to freedom is through overthrowing the regime!”

This initiative took place on the evening of March 13, with many residents applauding this anti-regime measure.

On the evening of March 9, members of the Resistance Units projected a giant slogan saying “Death to Khamenei! Hail to Rajavi!” on the wall of a high-rise on Tehran’s Jalal Al Ahmad Highway, one of the city’s main thoroughfares.

A Large “Death to Khamenei! Hail to Rajavi!” slogan was projected on skyrise in Tehran, on March 9.

On the evening of Monday, February 28, Tehran and Shahriar, west of Tehran, were the sites of yet another wave of anti-regime slogans blasted in public places.

People at the famed Tehran market heard such slogans denouncing the regime’s senior leaders and asking for the overthrow of the mullahs’ establishment throughout the afternoon hours.

“The Iranian people are informed, and they despise the Shah and the mullahs!” referring to the Iranian people’s 1979 overthrow of the Shah’s monarchical rule, as well as the people’s opposition to the present ruling mullahs’ regime

A similar situation was witnessed on Vali Asr Avenue in Shahriar, a city located just west of the Iranian capital Tehran, with anti-regime shouts aired in public:

“Death to Khamenei! Hail to Rajavi!”

“Death to oppressors! Be it the Shah or the mullahs!”

“Death to Khamenei and Raisi!”

It is worth noting that during the November 2019 uprising, Shahriar was one of the hotspots of major battles between courageous protestors and the regime’s oppressive forces. In order to disperse the protests, authorities resorted to using live ammunition, killing and injuring several.

According to reports and video evidence from inside Iran, on February 24, members of the Resistance Units, a network linked with the MEK inside Iran, aired anti-government audiotapes in the cities of Tehran and Mashhad, with slogans against the regime played in two busy streets.

On February 11, the anniversary of Iran’s 1979 Revolution, anti-regime slogans were aired over the loudspeakers of a Saderat Bank branch in Shahriar, west of Tehran.

The tape had slogans that referred to Raisi as a butcher, called for the overthrow of the mullahs’ dictatorship, and praised the leaders of the Resistance. A local government informs the public that the bank’s audio system has been compromised and requests that they avoid the area and refrain from listening to the slogans. The event occurred a day after identical slogans were broadcast in Fardis, Sarasiab, and Shahr-e Rey, which are located west and south of Tehran, respectively.

Similar slogans were heard at Mashhad’s Bazaar Reza on February 9. Locals claimed the market’s computer system had been hacked at the time. The incident occurred just weeks after the regime’s state-run broadcasting infrastructure was broken, resulting in footage of Iranian Resistance leaders being broadcast on state television.