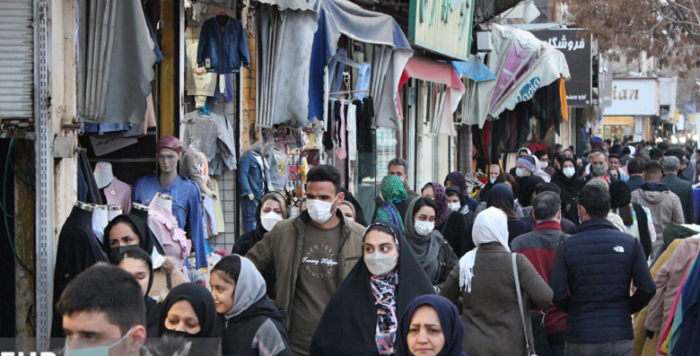 Over 509,000 people have died of the novel coronavirus in 547 cities checkered across all of Iran’s 31 provinces, according to reports tallied by the Iranian opposition People’s Mojahedin Organization of Iran (PMOI/MEK) as of Saturday afternoon local time, February 19. The official death toll declared by the regime stands at 135,040, around a fourth of the actual figure.

The regime’s Health Ministry announced the mullahs’ engineered Covid-19 numbers from the past 24 hours on Sunday as 16,968 new cases and 242 deaths. Furthermore, 4053 patients are in ICUs and 2315 of the new cases have been hospitalized. “With the spread of omicron across the country, the number of cities registered as red zones has jumped from 247 to 337; we have 64 orange cities, 47 yellow, and zero blue cities,” the Health Ministry announced on Saturday.

We currently have 2349 patients hospitalized in ICUs across [Tehran] province, indicating a 2.6 percent increase in comparison to last week,” said Alireza Zali, head of the Tehran Covid-19 Task Force on Saturday, according to the semi-official ISNA news agency.

“The number of missions related to coronavirus has tripled during the sixth peak and the number of calls to Tehran’s emergency services has reached around 9,000 per day,” according to a statement released by the Tehran Emergency Center on Saturday.

“The weekly Covid death toll in Tehran province has reached triple digits in the past week,” according to a report wired on Saturday by the regime’s official IRNA news agency.

“More than 60 percent of the coronavirus tests have been positive and they will be confirmed to have contracted the virus. Furthermore, in comparison to last week we are seeing a 14 percent increase in the number of patients hospitalized,” said the dean of Kerman Medical Sciences University on Saturday, according to the semi-official ISNA news agency.

“The rising trend of the sixth coronavirus peak that began two weeks ago continues to this day. The number of patients hospitalized has quadrupled in comparison to two weeks ago,” said the dean of Ardabil Medical Sciences University on Saturday, according to the regime’s official IRNA news agency.

“26 cities in Fars province are registered as red zones, seven are orange, and three are yellow. We have 1279 patients hospitalized, of which 168 are in ICUs. During the past 24 hours, 19 patients have lost their lives,” according to a statement released Saturday by the Shiraz Medical Sciences University. “We currently have 1268 coronavirus patients hospitalized in Isfahan province (aside from the cities of Kashan and Aran & Bidgol), of which 183 are in ICUs,” said the spokesperson of Isfahan Medical Sciences University on Saturday, according to the semi-official IMNA news agency.

“The areas registered as red covid zones across Razavi Khorasan province have increased to 25 cities. During the past 24 hours, 257 covid patients have been hospitalized. Of the 1080 patients hospitalized 220 are in ICUs,” according to a statement released Saturday by the Mashhad Medical Sciences University.

“In Bushehr the coronavirus sirens are sounding. During the past 24 hours, seven patients lost their lives, and 81 covid patients were hospitalized,” according to a report wired Saturday by the regime’s official IRIB news agency.