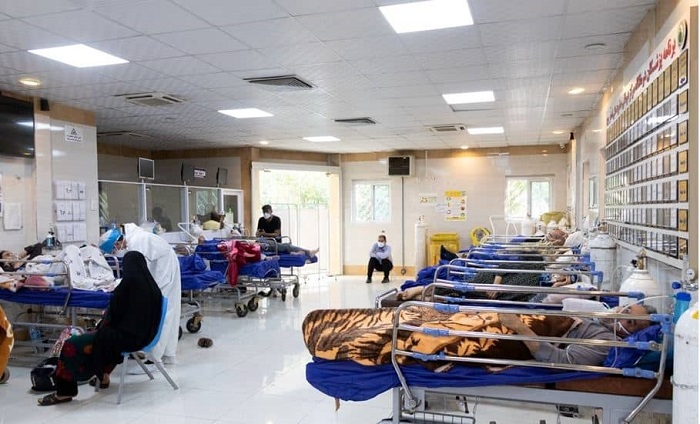 Over 518,800 people have died of the novel coronavirus in 547 cities checkered across all of Iran’s 31 provinces, according to reports tallied by the Iranian opposition People’s Mojahedin Organization of Iran (PMOI/MEK) as of Sunday afternoon local time, March 6. The official death toll declared by the regime stands at 137,948, around a fourth of the actual figure.

The regime’s Health Ministry announced the mullahs’ engineered Covid-19 numbers from the past 24 hours on Sunday as 5586 new cases and 201 deaths. Furthermore, 3722 patients are in ICUs and 1014 of the new cases have been hospitalized.

“The death rate remains high. We currently have 2900 patients hospitalized, of which 1000 are in ICUs and around 2000 are in general branches,” said Nader Tavakoli, deputy chair of the Tehran Covid-19 Task Force on Sunday, according to the semi-official ISNA news agency.

“Coronavirus are accepted in all state-run hospitals. All services are provided even on holidays. In comparison to one month ago dozens and maybe even hundreds of family members from Khuzestan, and they passed away in this peak,” said the caretaker dean of Ahvaz Medical Sciences University on Sunday regarding Khuzestan province, according to the semi-official ISNA news agency.

“More than 20 percent of those being hospitalized across the country are children,” according to a statement released by the Shiraz Medical Sciences University on Sunday regarding the threat of children attracting omicron.

“We currently have 817 coronavirus patients hospitalized, of which 162 are in ICUs. During the past 24 hours 17 people have lost their lives,” said the spokesperson of Isfahan Medical Sciences University on Sunday, according to the Tasnim news agency, an outlet linked to the regime’s Revolutionary Guards (IRGC) Quds Force.

“We currently have 612 coronavirus patients hospitalized, of which 185 are in ICUs and 50 are under ventilators,” according to a statement released by the West Azerbaijan Medical Sciences University on Sunday.

“The covid death toll is now in double figures. We currently have 351 patients hospitalized, of which 119 are in ICUs and 21 are in dire conditions,” according to a statement released by the Kermanshah Covid-19 Task Force on Sunday.

“During the past 24 hours 216 coronavirus patients have been hospitalized. We currently have a total of 748 patients hospitalized, of which 198 are in ICUs,” according to a statement released by the Razavi Khorasan Medical Sciences University on Sunday.

“Iran is among those countries with the highest death toll and number of new cases per day. Iran ranks tenth in the world, indicating that the new variants of this virus have overcome the existing vaccines, and omicron continues to spread at a high rate… Iran has yet to control the virus in the first wave and we have seen six waves to this day spread across the country. Warnings regarding a seventh peak of this illness in the spring season are escalating,” according to a piece published on Sunday in the state-run Mostaghel daily.