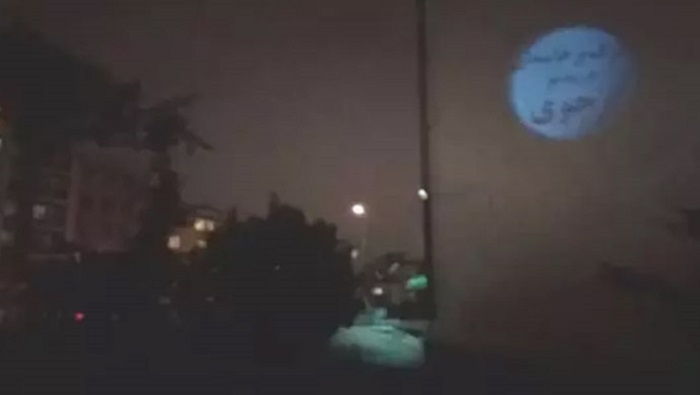 On the side of a highrise on Tehran’s Jalal Al Ahmad expressway, members of Resistance Units, a huge network affiliated with the Iranian opposition People’s Mojahedin of Iran (PMOI/MEK), projected a massive slogan saying “Death to Khamenei! Hail to Rajavi!” This action took place on the evening of March 9, with many locals applauding the anti-regime protest.

On the evening of Monday, February 28, the capital, Tehran, and Shahriar, west of Tehran, were the sites of yet another wave of anti-regime slogans blasted in public spaces.

People at the famed Tehran market heard slogans denouncing the regime’s senior officials and calling for the mullahs’ establishment to be overthrown during the afternoon hours.

“Iranians are informed, and they despise the Shah and the mullahs,” she said, referring to the Iranian people’s rejection of the Shah’s monarchical rule in 1979 and their resistance to the present mullahs’ regime.

“Death to Khamenei and Raisi,” another slogan read, the latter referring to current regime President Ebrahim Raisi, who is best known for his direct role in the massacre of over 30,000 political prisoners, predominantly MEK members and supporters, in Iran’s summer 1988.

“Death to the mullahs’ principle!”

A similar situation was spotted on Vali Asr Avenue in Shahriar, a city located just west of Tehran, with anti-regime slogans aired in public:

“Death to oppressors! Be it the Shah or the mullahs!”

“Khamenei and Raisi must perish!”

The city of Shahriar was one of the hotbeds of major fights between daring protesters and the regime’s suppressive forces during the November 2019 uprising. To disperse the demonstrators, authorities used live fire, killing and injuring numerous people.

On February 24, reports and video footage from inside Iran revealed that members of Resistance Units, an Iranian network linked with the MEK, blasted anti-regime audiotapes in Tehran and Mashhad, with anti-regime chants being chanted in two busy streets.

People in Tehran’s Tajrish Bazaar witnessed anti-regime slogans being played in the vicinity on February 19. Among the slogans were:

“Death to Khamenei, hail to Rajavi!” exclaims the crowd.

“The mullahs’ days are numbered, neither crown nor turban!”

Anti-regime slogans were aired from the loudspeakers of a Saderat Bank branch in Shahriar, west of Tehran, on February 11, the anniversary of Iran’s 1979 Revolution.

The tape contained slogans calling Raisi a butcher, calling for the mullahs’ rule to be overthrown, and praising the Resistance’s leaders.

People are being told that the bank’s audio system has been hacked, and they are being asked to leave the area and not listen to the slogans.