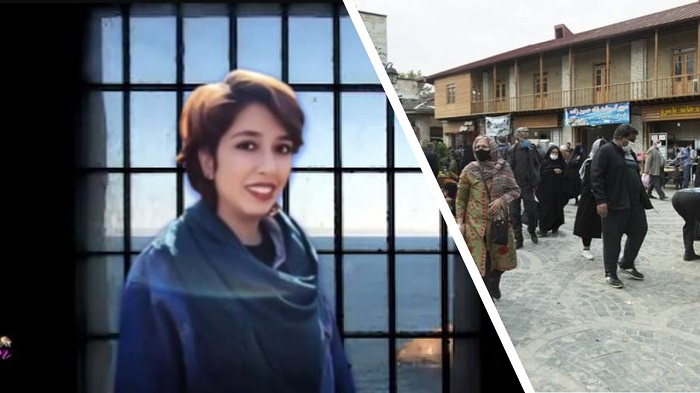 Saba Kord Afshari, a political prisoner, has been denied three months of prison leave by the authorities in Qarchak Prison. Ms. Kord Afshari was denied prison furlough by the Disciplinary Council of Qarchak Prison after she protested the shortage of hot water for the prisoners’ usage.

Saba Kord Afshari has been subjected to pressure before while serving her sentence in Qarchak. On January 4, 2022, the guards in Qarchak Prison’s visitation hall disconnected her phone before she ended her cabin visit with her father.

Saba Kord Afshari refused to leave the visitation hall in protest, insisting on saying farewell to her father. Prison guards, on the other hand, forced Mr. Kord Afshari out of the hall and intimidated him. Saba was eventually threatened with deprivation of visits by the deputy warden of Qarchak Prison.

Saba Kord Afshari, a vocal opponent of the Hijab, was detained on June 1, 2019. Saba Kord Afshari was sentenced to 24 years in prison by Tehran’s Revolutionary Court on August 19, 2019.

She was transferred to Qarchak Prison on December 9, 2020, as part of a scheme to distribute political detainees from Evin Prison’s women’s ward.

On December 13, 2020, a group of 20 guards commanded by Soghra Khodadadi, the new warden of Qarchak Prison, raided Ward 8, where a dozen political inmates were detained. Several convicts were beaten brutally and injured. Saba Kord Afshari’s teeth were broken, and her shoulder and back were damaged.

On January 26, 2021, she was violently transferred from Ward 8 to Ward 6, where she eventually contracted the Covid-19. The relocation of this political prisoner is a violation of the principle of crime separation. A violent criminal intimidated Saba Kord Afshari in Qarchak Prison by standing outside ward 6 and showing Saba Kord Afshari a razor blade. The jail authorities had enticed the dangerous offender to do so.