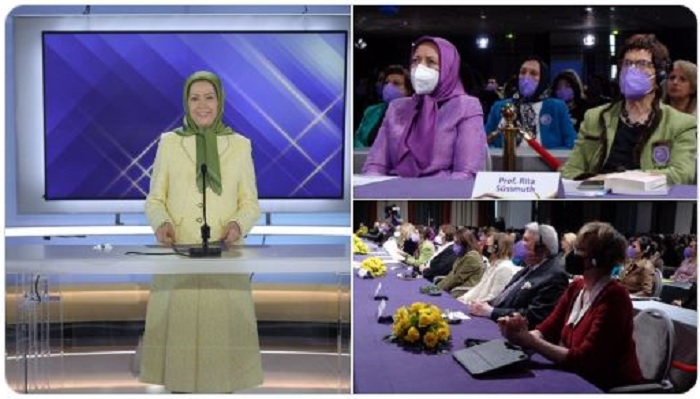 Over 60 notable women politicians from 35 nations spanning four continents, as well as many more women from 54 countries around the world, addressed and participated in a seven-hour-long online global conference on March 5 ahead of International Women’s Day on March 8.

The conference’s keynote speaker was Maryam Rajavi, the President-elect of the National Council of Resistance of Iran (NCRI). The conference’s theme was ‘Women, Force for Change in Iran, Global Peace, and Stability.’ “Millions of women and girls have fought for freedom and flocked to the battlefield in droves, from ministers and lawmakers to elderly mothers.” “Hail to mothers who sent their children to others so that they could themselves join the resistance, and to smiling and spirited young girls who make Molotov cocktails,” she said.

Hello this is Kira Rudik .@kiraincongress again.
I would like to thank .@Maryam_Rajavi for making this special event dedicated to Ukrainian women who are fighting for their freedom.
Thank you so much ✌️#WomenForce4Change#IWD2022#WeStandWithUkraine pic.twitter.com/nALw0tqV4d

“I am reminded of the women and girls of the People’s Mojahedin in the massacre of our prisoners in 1988 on Khomeini’s fatwa,” Mrs. Rajavi continued. “With clenched fists and defiant chants, they marched to the gallows. For Iranian women, International Women’s Day is a day of pride and honour. Because they have stood against the monsters of misogyny, coercion, looting, and oppression this year, as they have for the preceding four decades.”

“Throughout the last year, women have been at the forefront of all protest movements, from the uprisings in Khuzestan, Isfahan, and Shahrekord to the complaints of teachers, nurses, and deceived investors,” she concluded. This is how Iranian women look in real life. Her scream isn’t one of sorrow and gloom. Rather, it is a battle cry to overturn the status quo of captivity, a cry to build a future that we can and must achieve.”

#IWD2022 is celebrated by those deprived of most empowerment opportunities but are harbingers of power and responsibility in today’s world. Congratulations on this day to women around the world, esp. my sisters in Afghanistan, Syria, Iraq, Yemen, Palestine, and Lebanon. pic.twitter.com/6jDIUlK69n

The speeches of two Ukrainian members of parliament, Ms. Kira Rudik, the leader of the political party Voice, and Ms. Lisa Yasko, a member of the Parliament’s Foreign Affairs Committee, who joined the audience online from Kyiv, energized the conference even more.

15 courageous women from the People’s Mojahedin of Iran (PMOI/MEK) Resistance Units were also present at the conference. Throughout their comments, they reaffirmed their desire to remove Iran’s misogynist dictatorship.

Ms. Helle Thorning-Schmidt, the former Danish Prime Minister, extended her support for the heroic Iranian women who are fighting the regime, saying, “You are our inspiration.” Your fight will have an impact not only on Iran, but also on women all across the world. Your country will embark on a new era. You will be an inspiration to women all throughout the world. The power of women is great. Female empowerment and autonomy are feared by misogynist leaders. Iranian women, on the other hand, have chosen a different route. They have refused to adhere to the regime’s demands. They’ve transformed themselves into a force for change in Iran.”

#InternationalWomensDay Conference in Berlin With the Participation of 170 Political Figures From 37 Countries.@Maryam_Rajavi: Let Us Call This Year’s International Women’s Day, the Day of Resistance by the Women of #Ukraine.#IWD2022 https://t.co/WbFexsZpH3

“Women have risen to take crucial positions in the Iranian Resistance movement under Maryam’s leadership,” she continued. I have always admired the work of the NCRI Women’s Committee, which I have followed with interest. Iranian women have been at the forefront of anti-Islamic regime rallies. They’ve displayed incredible bravery, intelligence, and strength.”