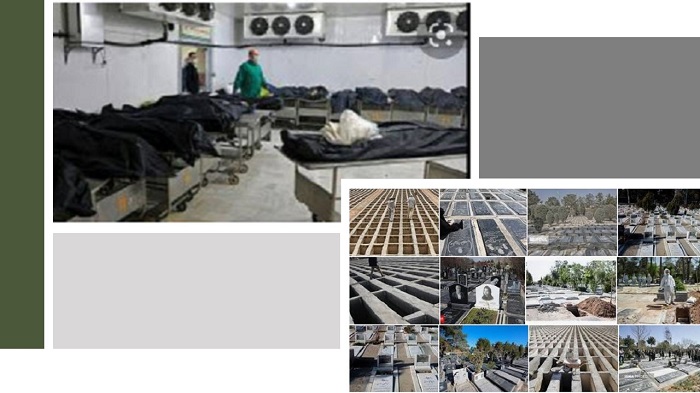 While coronavirus has claimed the lives of 5.6 million people worldwide, the Iranian opposition, the People’s Mojahedin of Iran (PMOI / MEK Iran) declared that the number of Covid-19 fatalities in Iran had crossed 500,000. In other words, Iran accounted for around one-tenth of all deaths worldwide.

This figure was compiled by the MEK’s domestic network, which now spans 547 cities across Iran’s 31 provinces. In this regard, the MEK has made daily announcements indicating the country’s dangerous coronavirus situation, in contradiction to the Health Ministry’s misleading reports.

A Half of Million Mortalities of Coronavirus

“No one could have predicted such a large number of victims two years ago,” Iran observers said. “What the Supreme Leader Ali Khamenei and the Islamic Revolutionary Guard Corps (IRGC) have imposed on the Iranian people is an extra crime.”

Khamenei described coronavirus as “not that big an issue” on March 3, 2020. It was even referred to as a “blessing” and an “opportunity” by him. Citizens were also urged to pray against the virus, as “prayer may solve many issues,” per the Supreme Leader.

Furthermore, the IRGC was instrumental in the transmission of the virus from China to Iran. While practically all countries and aviation businesses had ceased their contacts with Chinese counterparts, Mahan Air, which is associated with the IRGC Quds Force, continued to fly to and from China in late 2019.

More than 500,000 people have died of #COVID19 in 547 cities checkered across all of #Iran's 31 provinces as of Tuesday, January 25, according to the #Iranian opposition @Mojahedineng (PMOI/MEK).pic.twitter.com/BddzIBigPQ

Meanwhile, the government has refused to provide assistance to millions of people who have been affected by the pandemic. Instead, in April, Hassan Rouhani, the then-president, ordered the reopening of schools, workplaces, religious and cultural venues, which resulted in the deaths of many more people.

On January 8, 2021, Khamenei issued a public statement prohibiting the import of reliable coronavirus vaccinations. “Imports of Covid-19 vaccinations from the United States and the United Kingdom are prohibited,” he stated. “I’ve told officials about this, and now I’m telling you about it openly.”

Khamenei boasted about local vaccines to quell public outrage. He was given two shots of the Iran-made Barekat vaccination during opportunistic advertising stunts. Iranians, on the other hand, never trusted him or his questionable vaccines, which were never verified by the World Health Organization (WHO).

Indeed, the Covid-19 vaccine had become a tool for the IRGC and its subsidiaries’ medicine mafia to enrich and pillage millions of individuals who had no choice but to receive IRGC-made vaccinations. At the time, health professionals condemned Khamenei’s claims as baseless.

On August 15, Ahmad-Reza Bahremand, a former senior official at the Pasteur institute, stated, “We cannot create IV fluids at the Pasteur facility; yet, we claim to produce six different vaccinations.”

On the same day, Amir-Hossein Qazizadeh Hashemi, one of Ebrahim Raisi’s vice presidents and the head of the Martyrs & Veterans Foundation, emphasized the government’s staggering gains from the pandemic. In an interview with the state-run TV channel Five, he stated, “Coronavirus treatment alone brings $111 million in profit per month.”

The National Council of Resistance of Iran (NCRI), the Iranian opposition group, claims that the regime in Tehran has utilized the coronavirus as a human shield to weaken people’s will to protest.

In her speech on June 20, 2021, NCRI President-elect Maryam Rajavi remarked, “To seal his regime’s ranks and confront popular upheavals, Khamenei created the route for the development of the coronavirus in Iran, causing more than 300,000 deaths to far.”

To close his regime's ranks and confront popular uprisings, Khamenei opened the path for the spread of the #coronavirus in #Iran, causing more than 300,000 deaths to date. On the other hand, he installed Ebrahim Raisi, the henchman of the #1988Massacre as president. pic.twitter.com/uX28nLqDJ1