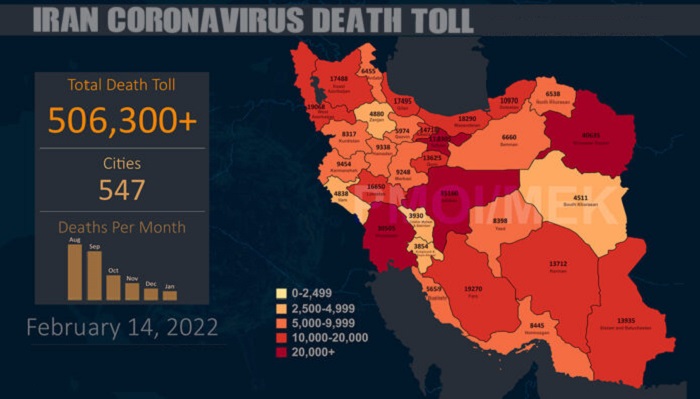 According to figures recorded by the Iranian opposition, the People’s Mojahedin of Iran (PMOI / MEK Iran), as of Monday afternoon, local time, February 14, over 506,300 people had died of the new coronavirus in 547 cities spread throughout all 31 provinces of Iran. The regime’s official death toll is 133,886, which is around a fourth of the true total.

On Monday, the regime’s Health Ministry released the mullahs’ contrived Covid-19 data, which showed 28,956 new cases and 168 deaths in the previous 24 hours. In addition, 3410 patients are in intensive care units, and 3157 new cases have been admitted to hospitals.

“In cities designated as red zones, not only should schools be closed, but no commuting should be allowed at all, in my opinion.” Because schools have remained open, the disease has lasted longer, and the death toll will rise. The number of persons seeking initial medical attention has risen dramatically, and the number of those admitted to hospitals has surged eight-fold. The death toll continues to rise. According to the semi-official ISNA news agency, Masoud Mardani, a senior member of the National Covid-19 Task Force, “it is very possible that the death toll and the number of ICU patients would climb.”

According to the regime’s IRIB news agency, a representative for Kerman Medical Sciences University said on Monday, “We have had 17 verified Covid deaths in the last 24 hours.”

270 coronavirus patients have been admitted to hospitals in the last 24 hours, bringing the total to 1280, with 170 in intensive care units. According to a report released Monday by the Fars news agency, which is tied to the Revolutionary Guards, 13 patients have died from coronavirus during this time.

“In the last 24 hours, 14,810 people have sought medical help in various places across Khuzestan, and 12 people have died as a result of Covid,” the vice dean of Ahvaz Medical Sciences University told the semi-official ISNA news agency on Monday.

“The number of persons admitted to hospitals has climbed by four to five times.” More than 30 to 35 percent of daily tests are positive, and this number is expected to rise. According to a study released on Monday by the Tabriz Medical Sciences University about East Azerbaijan province, “we have a daily average of 255 patients hospitalized and six to seven deaths.”

According to a report released on Monday by the regime’s official IRNA news agency, the number of coronavirus patients hospitalized owing to omicron has surged by more than fourfold in Gilan province.