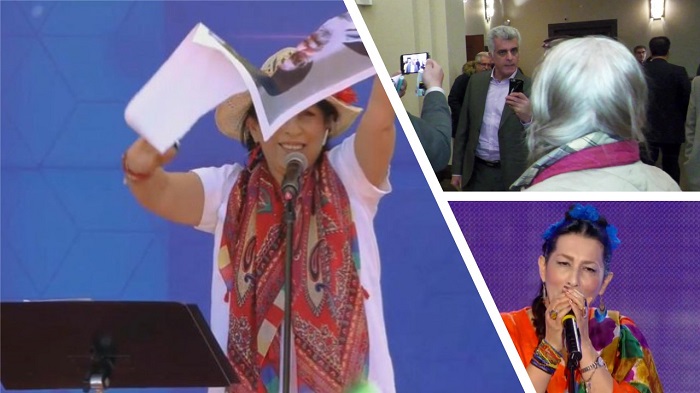 On March 9, Mohammad Reza Nili, the clerical regime’s Consul-General in Stockholm, hurled a vicious insult at renowned Iranian singer Ms. Gisoo Shakeri after she objected to being photographed and filmed by him outside the Swedish Courtroom, where Hamid Noury, one of the regime’s henchmen, is on trial for his role in the massacre of 30,000 political prisoners in Iran in 1988.

Ms. Shakeri’s unwavering support for the Iranian people’s Resistance, particularly in defense of Iranian women’s rights and liberties, as well as her tearing and torching of photos of Khomeini, Khamenei, and Ebrahim Raisi at rallies, have enraged the regime’s officials. Ms. Shakeri, the rebellious artist, had previously been humiliated, slandered, and intimidated by government officials for doing so.

The belittling of Ms. Shakeri by a clerical regime diplomat is without a doubt a flagrant breach of Swedish and European law. He should be deported and barred from ever appearing in court again as a result of his actions.

The embassy and regime officials in Sweden appear to have been very frustrated and angered by Kenneth Lewis, the plaintiff’s lawyer’s arguments and questions during yesterday’s session. Mr. Lewis, a prominent Swedish lawyer and jurist, cornered Hamid Noury into making several admissions in his well-reasoned remarks and questions yesterday, frightening Noury’s behind-the-scenes handlers, especially at the regime embassy, which explains Nili’s repugnant behaviour outside the courtroom.

Kenneth Lewis provided documents, including an audiotape of Nasserian (cleric Mohammad Moghiseh– a criminal judge infamous for sentencing prisoners to death or long prison terms on false charges) and Ali Razini (head of Branch 41 of the regime’s Supreme Court), refuting claims made by Hamid Noury and all Ministry of Intelligence agents that the henchman involved in the 1988 massacre in Gohardasht prison was another individual with the (Hamid Abbasi). The evidence and reasons were so compelling that Noury had no choice but to admit that the voice on the audiotape was Nasserian’s and made the mistake of attempting to justify his prior claims.

Similarly, developments in the Swedish court spurred Kazem Gharibabadi, the regime’s Judiciary’s International Affairs Deputy, to go insane and attack the People’s Mojahedin of Iran (PMOI/MEK). He also wrote a series of letters to the UN Secretary-General, the UN High Commissioner for Human Rights, the President of the Human Rights Council, the Presidents of the EU Council, the Commission, and the European Parliament out of desperation, complaining about the MEK’s standing among European parliamentarians and institutions.

At the Munich Security Conference on February 20, Hossein Amir-Abdollahian, the clerical regime’s Foreign Minister and an aide to the eliminated commander of the terrorist Quds force, Qassem Soleimani, met with the foreign ministers of Belgium and Sweden and complained about the regime’s ongoing trials in both countries. “It is intolerable that bilateral relations between our nations have become a target of the Mujahedin-e Khalq (MEK)” he told Swedish Foreign Minister Carl Bildt about Hamid Noury’s prosecution.