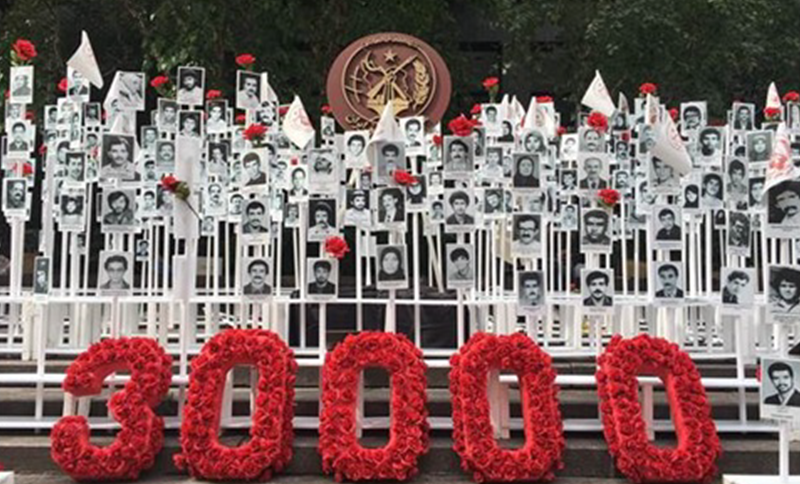 During the summer of 1988, more than 30,000 political prisoners were executed following a fatwa that was issued by the then Supreme Leader. Most of those who died were members or supporters of the PMOI – the main opposition to the Iranian regime.

So-called “death commissions” were set up to question prisoners about their beliefs and followings. If the prisoner so much as expressed sympathy with the PMOI, they were sent for execution.

The 1988 massacre is a major crime against humanity in which the perpetrators have never been brought to justice. Furthermore, many of the officials that were part of the death commissions or involved with the executions are today occupying senior posts within the Iranian regime.

The families of the victims have been campaigning for truth and justice, but have been systematically targeted and intimidated by the regime’s suppressive forces.

The regime has recently been trying to cover up some of the evidence related to the 1988 massacre, including covering over or building on top of mass grave sites.

It was recently reported that Mostafa Pour-Mohammadi, Advisor to the Iranian regime’s Judiciary Chief and a former Interior and Justice Minister, defended the massacre. He said that those that were killed are “criminals and terrorists” and that no commission should be set up to look into the circumstances surrounding the summer of 1988 because the country was “in the middle of a war”.

He questioned: “Are we really expected to talk about legal debates and civil and humanitarian protections when we are in the middle of a war?”

Just a couple of days ago, another judiciary official defended the massacre. Ali Razini said that Supreme Leader Khomeini’s fatwa was carried out without being impeded by “red tape”. His admission shows that the regime then, and now, completely disregards international laws and norms.

The regime’s Deputy of Legal Affairs and Judicial Development of the Judiciary said: “One of the most important benefits of this edict was that the opponents who had taken part in the Mersad Operation were dealt with by these courts. That is, we did not bring any of those arrested to trial in Tehran or Ahwaz. In the same war zones, they were arrested, tried and punished.”

When he was asked how many people were executed, Razini brazenly responded: “I do not remember. Back then we were busy and didn’t have time to count.”

It called on the United Nations and its member states to urgently open up an enquiry into the massacre so that the impunity the perpetrators have enjoyed can finally come to an end. “Amnesty International therefore renews its call on the UN and its member states to explore concrete pathways to truth, justice and reparation. These pathways should ensure that the truth regarding the mass extrajudicial executions of 1988 is disclosed, including the number of those killed in 1988, their identities, the date, location, cause and circumstances of each enforced disappearance and extrajudicial execution and the location of the remains; that those suspected of responsibility are prosecuted in fair trials without imposition of the death penalty; and that survivors and families of victims are provided reparations in accordance with international standards.”