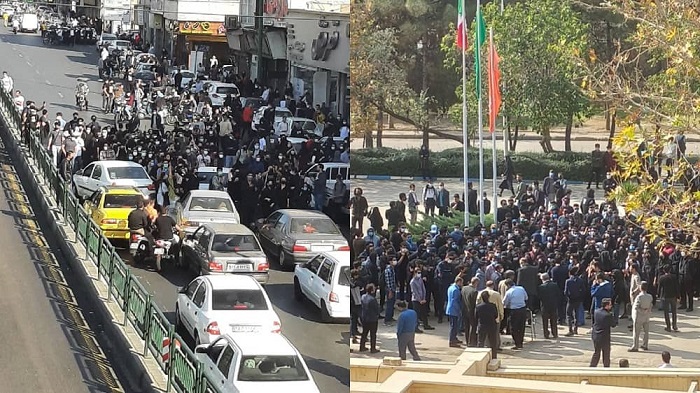 Protests have spread and continue to take place across Iran, despite the regime’s efforts to suppress them, exposing the regime’s flaws more than ever. Although many observers believe the protests have turned into a revolution, authorities continue to insist that everything is “normal” and “under control.”

“The provinces are in good shape, and there is no longer unrest or rioting.” Majid Mir-Ahmadi, the political assistant to the interior minister, was quoted as saying on Saturday by the state-run Tasnim News Agency: “However, there are some sabotage efforts.”

Mir-Ahmadi might be alluding to the ongoing torching of the regime’s emblems and banners by rebellious youth throughout Iran. Regime officials are contradicting their own claims because the rhetoric of “stability” and “victory” contrasts sharply with the reality of escalating protests.

“On September 24, I declared the unrest to be over. However, the consequences may take some time to settle. We have quelled the sedition in the Special Forces,” Revolutionary Guards (IRGC) Brigadier General Hossein Karami, head of the regime’s Special Forces, claimed on October 15, according to the state-run Entekhabt website.

Authorities attempt to instill hope in their demoralized forces as they confront a volatile society and a populace eager for regime change at any cost. On October 11, the Iranian Resistance made public a highly secret directive order issued by Hossein Salami, the head of the IRGC.

Salami instructed that IRGC commanders “be alert and brief the forces on the ground, including employed forces, Basij agents, and intelligence sources… Refrain from deploying demoralized, disgruntled, and dissatisfied personnel in riot control operations and prevent their participation in operations aimed at calming the situation,” he added.

The regime’s unwillingness to accept and acknowledge the Iranian people’s revolution is the primary cause of the officials’ contradictory statements and propaganda. Any acknowledgment of the nationwide and ongoing protests will cause major schisms at the regime’s top.

For instance, the People’s Mojahedin of Iran (PMOI/MEK), Iran’s main opposition group, has been brutally persecuted by the clerical regime. Any interaction with the MEK is punishable by death under the mullahs’ rule. The MEK is nevertheless consistently portrayed as a “fringe group” with little to no popular support by Tehran and its Western defenders. Authorities are noticing and attempting to suppress the growing trend of young people joining the MEK’s “Resistance Units” network. Yet, they cannot help but stop their propaganda against the Iranian opposition.

Contrary to what Tehran claims, its oppressive apparatus is frail as shown by the courage of Iranian protesters who engaged the regime’s officers with their bare hands. The regime’s claims of “stability” should not deceive the international community. This would only give Tehran a license to carry on with its murderous rampage. The international community should accept the unavoidable by recognizing the Iranian people’s right to self-defense and future self-determination.