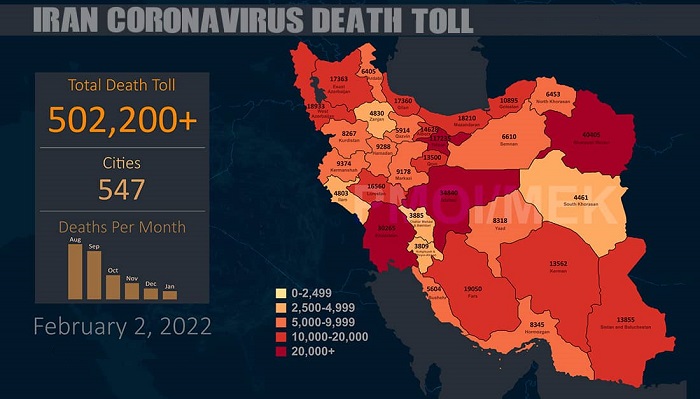 According to figures recorded by the Iranian opposition the People’s Mojahedin of Iran (PMOI / MEK Iran) as of Wednesday afternoon, local time, over 502,200 people have died of the new coronavirus in 547 cities spread throughout all 31 provinces of Iran. The regime’s official death toll is 132,563, which is around a fourth of the true total.

The regime’s Health Ministry claimed on Wednesday that the mullahs’ contrived Covid-19 statistics for the previous 24 hours were 38,160, a 300 percent increase over last week.

According to the Mehr news agency, which is linked to the regime’s Ministry of Intelligence and Security (MOIS), “the number of omicron patients is far higher than the figures being announced,” and “it is possible that in the coming weeks each day we will have up to 100,000 new cases,” said Ebrahim Ghaderi, head of the Health Ministry’s Infectious Diseases Center on Tuesday.

According to the state-run Tabnak website, Deputy Health Minister Kamal Heydari said on Wednesday that the number of persons seeking primary medical care in Iran had quadrupled.

According to the regime’s official IRNA news agency, “considering the increasing number of red cities and alarm bells sounding regarding the omicron pandemic, coronavirus restrictions should be imposed, including closing down schools, limiting scientific and cultural sessions, and gatherings,” Masoud Mardani, a member of the National Covid-19 Task Force, said on Wednesday.

“While many Covid-19 experts are advocating for school closures, an Education Ministry official made bizarre remarks, claiming that if somebody contracts Covid-19 and dies, we will pay 150 million rials ($530),” according to a report published in the state-run Hamdeli newspaper.

According to the state-run Mardom-Salari newspaper, a member of the Iran Medical Sciences University remarked on Tuesday, “The number of children getting hospitalized is 50 to 60 percent greater, indicating we are moving into a situation where children will be significantly involved.”

“The sixth peak is beginning to swell. According to the semi-official ISNA news agency, the chief of the ICU section of Mashhad’s Imam Reza Hospital in Razavi Khorasan province remarked on Wednesday that “during this height, we will have a huge number of patients contracting the virus and the illness load will be very significant.”

“The fact that 198 people have been admitted to hospitals in the last 24 hours is alarming. The situation in [Fars] province is deteriorating by the minute.  Shiraz, Zarghan, and Garash have been designated as red zones, said the caretaker of Shiraz Medical Sciences University on Wednesday.