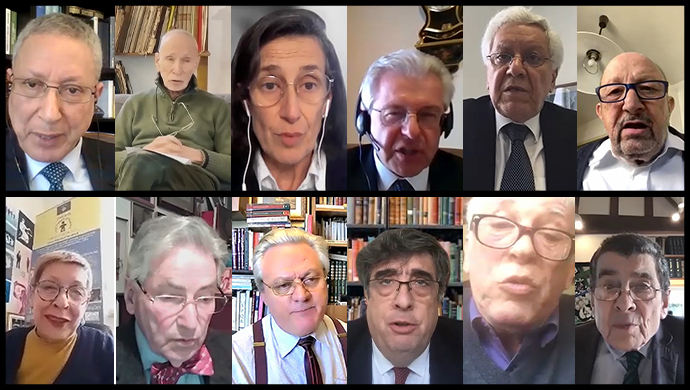 On Monday, a panel of a dozen well-known human rights activists and groups conducted a virtual conference to express concern over Iran’s dire human rights situation. The meeting took place on the first day of the United Nations Human Rights Council’s 49th session, which was held in Geneva. Former UN judges, special rapporteurs, UN officials, notable jurists, and human rights figures were among those who called on the UN to launch an independent investigation into the 1988 massacre of 30,000 political prisoners, which has gone unpunished for more than three decades.

“That fatwa was a death punishment for all the opposition and the [People’s Mojahedin of Iran (PMOI / MEK Iran)] MEK,” he stated, alluding to a fatwa issued by regime founder Ruhollah Khomeini, in which he called for the death penalty for all MEK followers and members. The 1988 massacre, according to Boumedra, was a “genocide” because it targeted MEK followers who adhered to a distinct understanding of Islam.

Professor Annalisa Ciampi, former UN Special Rapporteur on the Rights to Freedom of Peaceful Assembly and Association and Ad hoc Judge of the European Court of Human Rights, has called for an investigation and accountability for the 1988 massacre and other crimes against humanity, including the brutal killing of protesters in 2019. “The United Nations cannot avoid its responsibilities,” Ciampistated.

“The 1988 massacre and the executions in 2019 are crimes against humanity,” Herve Saulignac, vice president of the French Parliamentary Group for a Free Iran, stated. An international probe into this genocide is required. It is critical to act now because we are aware that the Iranian regime is erasing evidence.”

In the 1988 massacre of political prisoners, France must hold the Iranian authorities accountable for perpetrating a crime against humanity, as per Saulignac. “Silence is not an answer,” he stated. “The regime’s 43 years of impunity must come to an end,” Hamid Sabi, one of the Iran Tribunal’s organizers, stated. The massacre of 1988 was a heinous crime against humanity.”

Professor Alfred-Maurice de Zayas, a former UN Independent Expert on the Promotion of a Democratic and Equitable International Order, has argued for Universal Jurisdiction to be used. “Justice must be served in all respects, particularly for the victims’ families.” Everyone has a right to hear the truth about the massacre in 1988, and the investigation should include all victims. Raisi’s role in the 1988 massacre must be prosecuted under Universal Jurisdiction, he argued.

Speakers during Monday’s online forum emphasized the international community’s responsibility to hold Iran’s homicidal dictatorship accountable for crimes against humanity. They urged a tough stance toward Iran’s leadership and emphasized the importance of an independent investigation into the 1988 massacre and other atrocities committed by Iran’s governing theocracy.

The gathering comes as concern grows over the 1988 massacre and other human rights violations in Iran, after initiatives led by the Iranian Resistance. Amnesty International issued a report prior to the UNHCR session, calling for a probe into the 1988 atrocity. The UN Special Rapporteur on the Situation of Human Rights in Iran, Javaid Rehman, in his most recent report, called for an end to impunity for human rights violations in Iran, as well as accountability for regime officials responsible for the 1988 massacre and the brutal suppression of protesters in November 2019.

In January, 470 current and former UN officials, international jurists, judges, and Nobel laureates signed a letter to the UN High Commissioner for Refugees (UNHCR) demanding an immediate investigation into the 1988 massacre. The role of regime president Ebrahim Raisi and judiciary leader Gholamhossein Mohseni Ejei in the crime against humanity is highlighted in the letter.