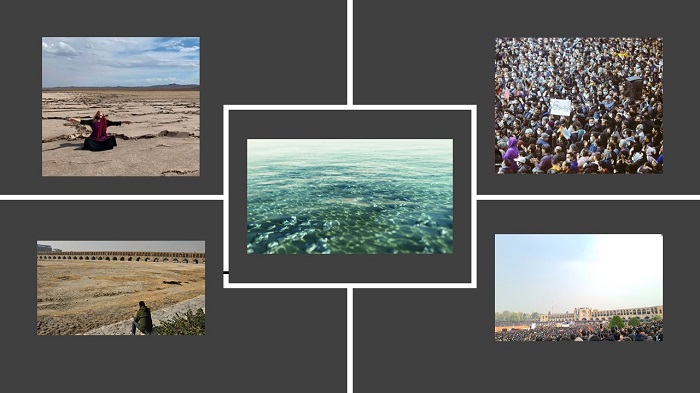 Iran is experiencing a serious water shortage. While the farmers of Isfahan protest and battle for their water rights, the people of Yazd and the surrounding villages beg for safe drinking water. This isn’t restricted to this region; the majority of Iran’s provinces are experiencing water shortages, from Khuzestan to Khorasan to Sistan and Baluchestan, where people rely on water tanks for survival.

Many Iranian environmentalists have been warning the regime’s administration about the dangers of drought and the degradation of the country’s natural resources for at least 20 years.

The dictatorship, however, detained, intimidated, and even murdered some of them in response to these warnings.

The country’s water supplies are being depleted by desertification.

The primary source of crises

Long-term investments and comprehensive funds are required to provide drinking water, agricultural water, and industrial water. Wasteful speeches by regime officials will not, however, be able to address the current crisis.

Thorough analysis and major decisions should have been made at least 20 years ago. The regime is hastening the country’s drought by building non-scientific dams and redirecting waterways. Because of other priorities, the regime has not given this super challenge the focus and effort it requires.

The regime’s only action to yet has been to persuade thirsty people to reduce their water usage and save water by displaying them a chart of rain reduction on television and telling them to be patient. People have the right to protest and demand water because governments are established to address such issues in emergency situations in any country, but in Iran, the regime’s governments have become the primary source of crises.

The growing brain drain from the country

It is hardly an exaggeration to state that the scale of the water issue necessitates all of the country’s time, energy, capacity, and resources. However, the regime is wasting it on a pointless nuclear dispute.

In most other locations, the situation is similar. The growing brain drain and the exodus of the country’s elites have gotten to the point where many regime elements and officials are being forced to introduce comprehensive citizen security as a solution to the regime’s leader, but this is not in keeping with the regime’s nature, which deprives the people of all social, political, and economic security.

Inflation, for example, may be regulated and even eradicated by particular financial activities and increased supervision, according to the reactionary regime’s dominant structural view. Some Iranian clerics have even said that the sky is waiting for the women’s hair to be covered until it rains as much as a rainy date, at which point they will be able to export water. These aren’t jokes; they’re the regime’s officials and components expressing absurd comments on official tribunes.