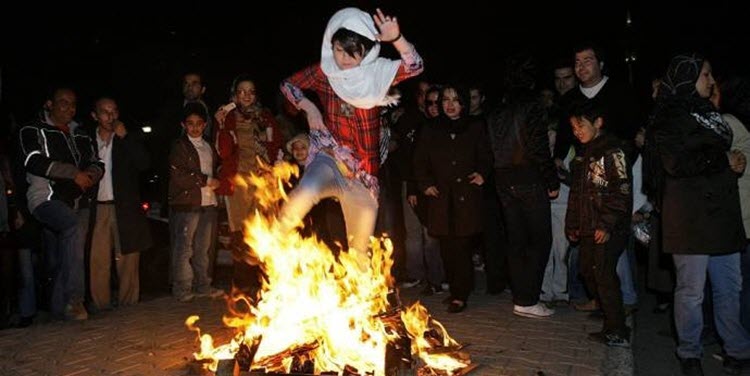 Nervous that the annual Fire Festivities in Iran will involve public demonstrations, authorities are continuing to put in place suppressive measures to crackdown on the public. There have also been an increasing number of arrests in the past few days.

Shopkeepers are selling firecrackers and many have been arrested and had their goods confiscated. Reports of this happening have been coming from numerous provinces including Isfahan, Chahar Mahal & Bakhtiary, Sistan & Baluchistan, Fars, Gilan, Tehran and many more.

The authorities have launched an absurd campaign in schools, forcing students to avoid playing with firecrackers during the festivities. The campaign named “No to Fire Festivities” is to provoke fear in the children.

The Fire Festivities in Iran have been opportunities for the public, especially the youth, to express their dislike of the mullahs’ regime.

The Iranian police chief Hossein Ashtari said: “The last Tuesday night of the (Iranian calendar) year and the New Year are amongst the missions that must be pursued with the utmost seriousness. We will not allow those disrupting the norms, hoodlums and gangs to roam free.”

He added: “A working group in the Supreme National Security Council has been established for destructive individuals to be controlled beforehand. We will face problems if we don’t take action… action is needed.”

He also said that the police will “take action” against any people it deems are “disrupting the norms”, saying that they will be detained until the end of the holiday period.

Iranian Deputy Interior Minister Zolfaqari threatened: “Those who seek to disrupt the society’s secure atmosphere must know the necessary predictions have been made and all coordination arranged with the judiciary.”

The People’s Mojahedin Organization of Iran (PMOI/MEK) have called on all people, in particular the youth, to protest against the regime and its suppression of the people. The opposition released a statement saying: “On the verge of the farce presidential elections, the mullahs’ regime and its disrupted factions are engulfed in a power struggle, and facing increasing hatred and anger from the population. Therefore, we must defeat the mullahs’ campaign of fear and terror through perseverance, solidarity and group efforts.”