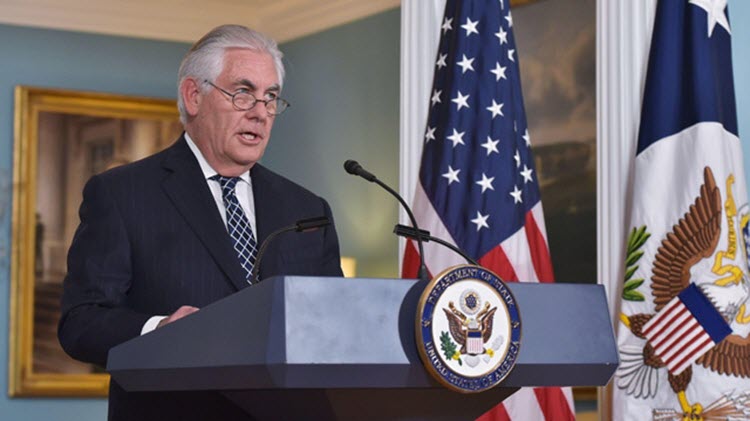 The Trump administration confirmed that Iran has complied with the 2015 nuclear disarmament deal, but says the White House is conducting an internal review of the landmark arms control accord. Trump once called it “the worst deal ever.”

In a letter to Congress, Rex Tillerson, Secretary of State, said that the National Security Council will lead an interagency review of whether easing economic sanctions against Iran as part of the accord “is vital to the national security interests of the United States.” He added, “Iran remains a leading state sponsor of terror through many platforms and methods.”

Sanctions aimed at Tehran’s support for terrorist groups and its ballistic missile program are maintained by The Treasury Department, and those could conceivably be changed, but any moves to impose new penalties could undermine the accord and spur a nuclear crisis in the Middle East.

The interagency review may also recommend other ways to apply pressure to Tehran.  The U.S. opposes Iran’s support of militant groups as well as President Bashar Assad’s military in Syria.

The White House is endeavoring to balance the threat of direct military action with the pursuit of diplomatic options, specifically with China, to slow down North Korea’s expansion of its nuclear arsenal or developing an intercontinental ballistic missile that could deliver a warhead to U.S.

Last week, when the Trump administration and North Korean leader Kim Jong Un’s government threatened one another over a possible North Korean nuclear test, tensions rose.  Ultimately, North Korea test-fired a midrange ballistic missile that fell in the ocean moments after it launched. White House warnings about an imminent aircraft carrier strike force proved false; the armada was 3,500 miles away, although the Pentagon stated Wednesday that four warships are headed to the Sea of Japan.

During Trump’s candidacy, he vowed to “rip up” the nuclear deal as soon as he took office, one of several signature campaign promises on foreign policy that he has ignored.

During their Senate confirmation hearings, several members of Trump’s incoming Cabinet said that they had decided the accord had effectively constrained Iran’s ability to produce a nuclear bomb, and Trump has not moved to overturn it.

Additionally, despite his vow on the campaign trail, Trump has not moved to “cancel” the Paris climate accord of 2015, and he has not abandoned the “one China” policy that has guided U.S. relations with Beijing for 40 years. He has not reversed the Obama administration’s opening to Cuba, although a high-level review is underway.

The State Department is now required by Congress to notify it every 90 days about Iran’s compliance with the nuclear deal, under which Tehran pledged to dismantle or disable its nuclear infrastructure, including its ability to produce bomb-grade fuel.

Last year, after the International Atomic Energy Agency, the U.N.’s nuclear watchdog agency, certified Tehran’s compliance with the nuclear deal, The United Nations Security Council lifted a web of trade, banking and other sanctions on Iran. The IAEA monitors Iran’s facilities regularly, and utilizes cameras and other surveillance systems. Iran’s leaders claim that they never intended to build a bomb.

A year after the deal came into force, the IAEA stated that Iran had reduced its uranium stockpile by 98% and had removed two-thirds of its centrifuges.

The accord, officially called the Joint Comprehensive Plan of Action, has faced major criticism, as does not address Iran’s support for terrorist groups. Its focus is only the curbing of Tehran’s ability to produce a nuclear bomb.

Pulling out of the deal would be more complicated than Trump has suggested.  It was negotiated with Iran by six world powers: the United States, Britain, France, China, Russia and Germany.  A unilateral withdrawal by the U.S. would create a diplomatic nighmare, especially if new sanctions were imposed over the objections of the other signatories.

Abandoning the deal could also give Iran an excuse to eject the IAEA inspectors, warned numerous security experts. Iran could rebuild its infrastructure, resume uranium enrichment and work toward building a bomb.

Israel was one of the most vocal opponents of the accord when it was being negotiated, but has now told the Trump administration that it should find additional measures to counter Iranian-backed terrorism, instead of lingering on the existing accord, say diplomatic sources.

Sean Spicer, White House Press Secretary, when asked about the Iran certification Wednesday, said Trump would await the review before deciding on the next step. “That’s why we’re undergoing this interagency review,” Spicer said at a news briefing. “We will have recommendations that will be presented to the president on where the deal stands and how to act further.”

For now, the administration is strengthening its alliance with Iran’s rival, Saudi Arabia. Iran is a Shiite Muslim theocracy whereas the Saudi kingdom is Sunni dominated.

Under the Obama administration, Saudi airstrikes in Yemen during that country’s civil war, were criticized, and

relations with Riyadh had deteriorated. James N. Mattis, Defense Secretary, on a visit to Riyadh on Wednesday, told Saudi officials that it was important to “reinforce Saudi Arabia’s resistance to Iran’s mischief.”  Mattis added, “Everywhere you look [that] there’s trouble in the region, you find Iran.” He said the Trump administration would help countries “trying to checkmate” Iran.

Critics of the nuclear accord say that the interagency review is a way to increase pressure on Tehran. “It underscores the Trump administration’s commitment to ramp up pressure on Iran through the use of sanctions tied to terrorism and other malign activities,” said Mark Dubowitz, head of the Foundation for Defense of Democracies, based in Washington.

On Wednesday, at the State Department, Rex Tillerson said that the White House will look at more than whether Iran is meeting its obligations under the nuclear accord. He cited its human rights record, its support for militants and what he called its “alarming and ongoing provocations to export terror and violence.”

He told reporters that the Iran nuclear deal, is “another example of buying off” an adversary that “only delays” production of nuclear weapons. “A comprehensive Iran policy requires we address all of the threats posed by Iran and it’s clear there are many,” he said.