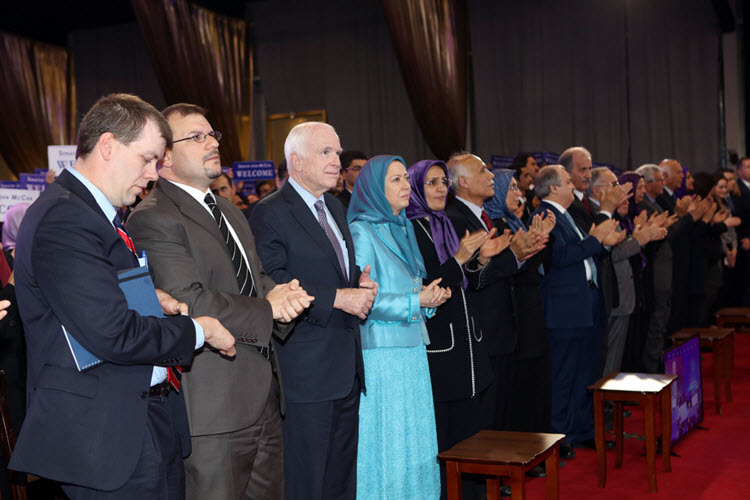 On Friday, amid the conflict of Iran’s upcoming presidential election on May 19, Senator John McCain, Chairman of the US Senate Armed Forces Committee and senior member of the Republican Party, visited Iranian opposition People’s Mojahedin Organization of Iran (PMOI/MEK) in Albania.

He met with Maryam Rajavi, President of the National Council of Resistance of Iran (NCRI), a combination of Iranian dissident organizations and individuals all seeking regime change in Iran. The PMOI/MEK is the largest of five different organizations in the NCRI.

Senator McCain congratulated PMOI/MEK members on their successful relocation to Albania from Iraq after having suffered several attacks in both Camp Ashraf and Camp Liberty from 2009 to 2016.

At a gathering at one of the PMOI/MEK’s sites in the Albanian capital of Tirana, Senator McCain said, “We now see an Iranian government that is attempting to extend its influence and tyranny throughout the Middle East. It is a fact that Bashar Assad would not be in power today if it had not been for the Iranian Revolutionary Guard and the Iranian help and Hezbollah that came in to Syria when Bashar Assad was about to fall.”

His visit may be viewed as a signal that he considers the NCRI as a viable solution in the face of the regime in Iran.

“I express my condolences to everyone in this room who has lost a loved one as a result of the Iranian tyranny and terrorism. You have stood up, fought, and sacrificed for freedom, for the right to live free, for the right to determine your future, for the right that is God given. …I thank you for being an example,” the Senator said, and thanked the government of Albania for accepting the PMOI/MEK members.

He commended Mrs. Rajavi’s leadership and emphasized, “Someday Iran will be free.”

NCRI President Maryam Rajavi also pointed out crimes committed by Tehran across the Middle East, in her remarks, especially those in Syria, Iraq and Yemen. “There is consensus on the destructive role of the clerical regime in the region and that the religious fascism ruling Iran is the main source of war, terrorism, crisis in the Middle East,” Mrs. Rajavi underscored. She explained that regime change in Iran is not only essential to bringing an end to gross human rights violations, but also considered a necessity for terminating war and crisis, and finally establishing peace and tranquility across the region.

“As long as Iran’s mullahs are in power,” Mrs. Rajavi said, “they will continue to export their terrorism and fundamentalism in their quest to obtain dominating hegemony throughout the Middle East.”

“This significant development places further spotlight on the regime in Iran, its nuclear program and its decades of support for terrorism throughout the Middle East. After enjoying eight years of appeasement and rapprochement from the US under the Obama administration, Iran is now facing extreme pressure after being placed ‘on notice’ by the Trump administration and seeing its puppet, the Assad regime, being the target of a cruise missile attack that analysts say was highly calculated by the White House, both militarily and politically,” wrote Heshmat Alavi, in an article for Al Arabiya.

Although it was not discussed during Senator McCain’s visit, the designation of Iran’s Revolutionary Guards (IRGC) as a foreign terrorist organization is a major initiative pursued by the NCRI. This designation has bipartisan support in Congress and may potentially deliver a major blow to Iran’s role in the Middle East.

According to the Alavi article, the IRGC is involved in training and dispatching foot-soldiers to Syria to maintain Assad’s position, as well as supporting Shiite extremists in Iraq, and supplying arms and other logistics to the Houthis in Yemen.

The timing of Senator McCain’s backing of the NCRI, less than a month away from a crucial presidential election, comes at a sensitive time for the regime in Tehran, as it is currently engulfed in a power struggle that may potentially lead to protests and uprisings within Iranian society.