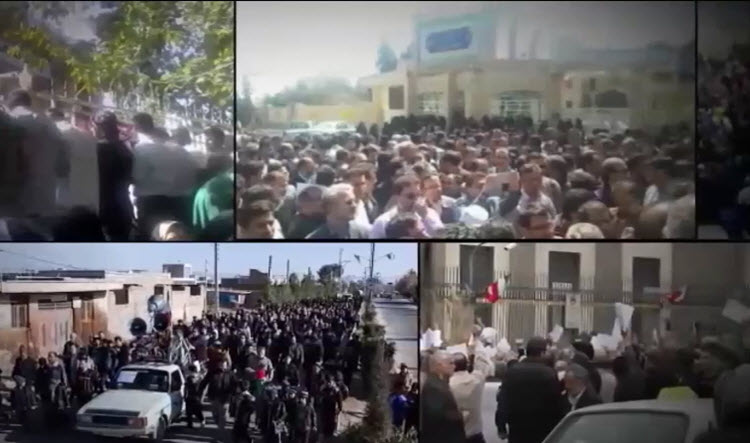 This is a summary of recent news about anti-regime protests in Iran reported on by the National Council of Resistance of Iran (NCRI) on Monday, 16 May.

Students at Sama University of Kermanshah in western Iran protested a new requirement, which stated that full payment of tuition fees was now a prerequisite for students wanting to receive their test card. The students said they cannot afford to pay the full tuition fee.

Employees in the Physical Education department at Sama University have also protested unpaid salaries and said that payments are over five months overdue.

Contractors from the Green Spaces Organization in western Iran have protested the three-month suspension of their wages. The workers, who were in charge of painting street curbs and passages, protested in front of the Sanandaj municipality building.

Personnel of the Emergency Centre Protest in Ilam

Staff at the Dr. Fattahi Emergency Centre in Ilam protested their three month suspended and irregular wages and they are demanding compensation.

Rally and Strike of Furniture Sellers in Yaft-Abad, Tehran

Furniture sellers of Yaft-Abad, particularly sellers in Omid Mall, protested the recession, which resulted in falling profits, and corruption within the Guild. They shut down their businesses and gathered in the streets stating that the mullahs’ regime has driven them to the brink of bankruptcy.

This protest started when market sellers witnessed a group of the regime’s plainclothes policemen raiding the central fruit and vegetable market of Tehran with the help of property inspectors and discretionary punishment agents.

The police sealed up two warehouses in the market before they clashed with the market sellers. The regime’s police left the area in fear of the protest escalating.

Students of the Free University Protest in Kashan

There were between 150 and 200 students at the Free University of Kashan who protested the low quality of food served in the university canteen.

This protest was led by fraud victims who were conned by the Padideh Shandiz Institute.

They gathered outside of President Hassan Rouhani’s office in Pastour Street, Tehran, and demanded that their stolen money be returned.

The Padideh Shandiz institute is just one of many financial companies that are founded by Iranian regime officials in order to steal the minuscule savings of the Iranian people.

Padideh Shandiz promoted itself as an international tourism development company; claiming to be active in restaurants, tourism and construction. Their television advertising reassured the public that the company was backed by the regime.

The company, which has close links to the regime’s Islamic Revolutionary Guards Corps, enticed potential investors by promising huge Returns for investments made in Shandiz, a suburb of Mashhad on the island resort of Kish.

In January 2015, it was revealed that the company manipulated their shares and committed $34.3 billion worth of fraud; many of the investors went bankrupt shortly after.

Several different protests have arisen over regime plans to re-route the Karoon River by building the Behesht-Abad Dam in south-west Iran.

The first of which happened in Ghadir sport stadium during a football match.

At the same time, demonstrators in Ahwaz gathered outside a library building, located on the west side of the Central Karoon riverbank. They formed a human chain; holding up signs and placards explaining their protest.

Protests and Unrest in Iran on the Rise