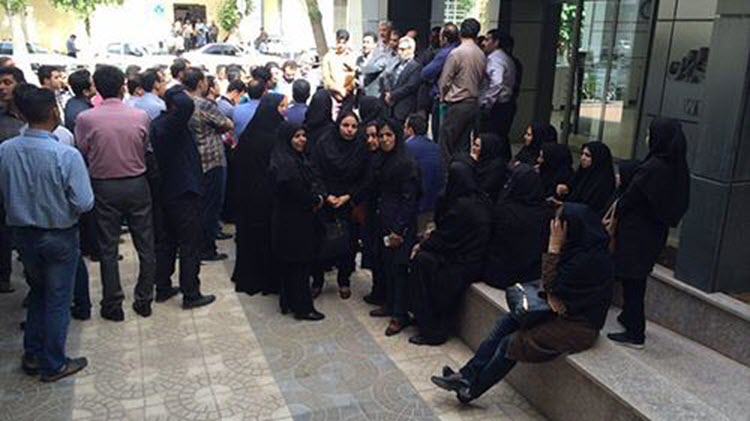 The National Council of Resistance of Iran (NCRI) have reported that people from the telecommunications industry gathered in protest outside the governorate in the province of Lorestan (Western Iran) on Monday 6th June. These people were protesting non-payment of their deferred salaries and benefits. They were also protesting the non-implementation of a new job classification scheme.
One of the protestors told the state-run Tabnak News Agency in Lorestan province: “We protest against the postponement of our salaries in this recession, and more importantly, non-implementation of the legislation regarding job classification in Lorestan’s telecommunication sector.”
“It is necessary and appropriate that the governor of the city take action to solve the problems of the personnel’s salaries and benefits as well as implementation of the job classification scheme in order to motivate and encourage the Telecommunication staff to provide optimal service to citizens,” another protestor told the news agency.
On the same day, the state-run ILNA news agency stated that the protest gathering of the retired workers of Iran’s Telecommunication Industry (ITI) is still continuing in Shiraz. The retired workers were gathered in the courtyard of this closed industry. They called for the presence of their trusted representatives at the meeting of the Labor Commission in Fars Province on Monday.
The ILNA news agency reported one of the retired workers as saying: “The Labor Commission in Fars province is going to have a meeting to address the problems of 300 retired workers of this factory. The demonstrators are demanding their guild representatives be allowed to attend this meeting.” He also said that it is possible that the meeting may be held without the participation of workers’ representatives and this is exacerbating their concerns.
He added: “In the past, neither the authorities nor the administrators of the retired and employed workers’ guild unions in Fars Province were able to give specific answers to me and my colleagues about the fate of our outstanding claims.”