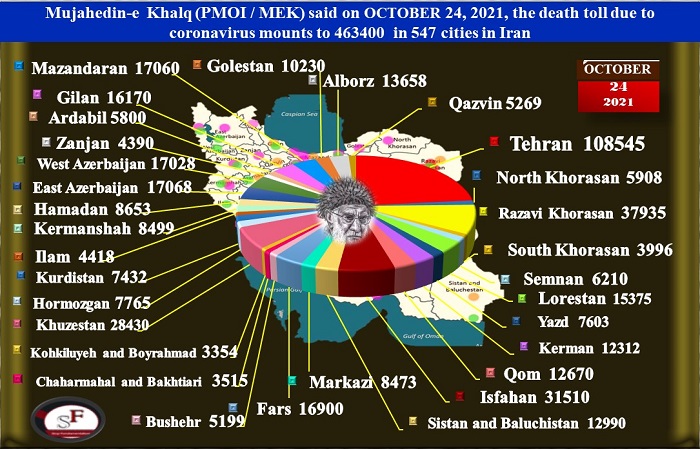 Iran’s weekly public prayer sessions are set to resume on Friday, as regime officials strive to resume normal procedures as the country is still dealing with a “fifth wave” of coronavirus infections.

Local reports, eyewitness statements, hospital and mortuary data have all been analyzed by the People’s Mojahedin of Iran (PMOI / MEK Iran) in order to come to different conclusions about the severity of the public health crisis. The true running death toll has been more than four times what the Health Ministry has disclosed to the public throughout the fifth wave.

While the regime’s contrived death toll was at 124,500 as of Wednesday, the MEK announced that the total death toll has risen to around 463,400. Tehran is attempting to conceal a series of mistakes in its approach to the crisis while simultaneously giving the impression that it is taking the problem seriously enough to anticipate it.

The regime’s blunders extend back to the outbreak’s early beginnings when the new coronavirus was transported back to Iran on one of the numerous flights that represent the country’s growing relationship with China, where the virus originated. According to documents seized by the MEK from Iran’s National Emergency Organization, the first probable cases of Covid-19 in Iran were discovered in mid-January. However, until more than a month later, on the eve of the dictatorship’s sham parliamentary elections, regime officials made no public mention of prospective outbreaks.

The date of the announcement was planned to give a cover story for the record low voter turnout in those elections, which was due to an organized boycott in the aftermath of large-scale anti-regime protests. Those protests made it all the more crucial for Tehran to dispute the evidence of theocratic system’s lack of popular support. In the days leading up to the sham elections.

Public gatherings staged by the government

Public gatherings staged by the government produced ideal conditions for the massive spread of coronavirus at a time when much of the public was unaware of its presence. The situation was compounded by Iran’s tight control of information, which has grown in recent years, particularly during bouts of large-scale upheaval. This phenomenon became apparent when word of viral outbreaks began to circulate within the country.

State media had already provided clear under-estimations of infection rates and death counts as early as February, estimates that were occasionally challenged by local officials in particularly hard-hit places such as Qom. Meanwhile, the judiciary has made it clear that anyone caught “spreading propaganda” by disputing such figures will be arrested and prosecuted.

Despite these early constraints, alternative estimates from the Iranian Resistance have gradually infiltrated Iranian culture, thanks in large part to social media and the widespread use of virtual private networks, which allow many Iranians to circumvent government internet filtering.

This pattern will very certainly raise public expectations of a more severe sixth wave than the Iranian Health Ministry predicts.

The dictatorship would not help people since its avowed objective is to subdue Iran’s restive people by utilizing this deadly virus.

Because of public distrust of official narratives

Because of public distrust of official narratives, the government appears to have abandoned preparations to distribute a domestically produced but untested version of the Covid-19 vaccine widely

In January, the regime’s Supreme Leader Ali Khamenei put a ban on vaccines developed in Europe and the United States. Iran’s coronavirus situation has gotten worse in the last year as a result of the prohibition. The severity of the situation, according to Khamenei’s decision, arises not only from incompetence but also from a deliberate attempt to utilize coronavirus outbreaks to prevent large-scale anti-government rallies like those that erupted in the months leading up to the pandemic’s onset.