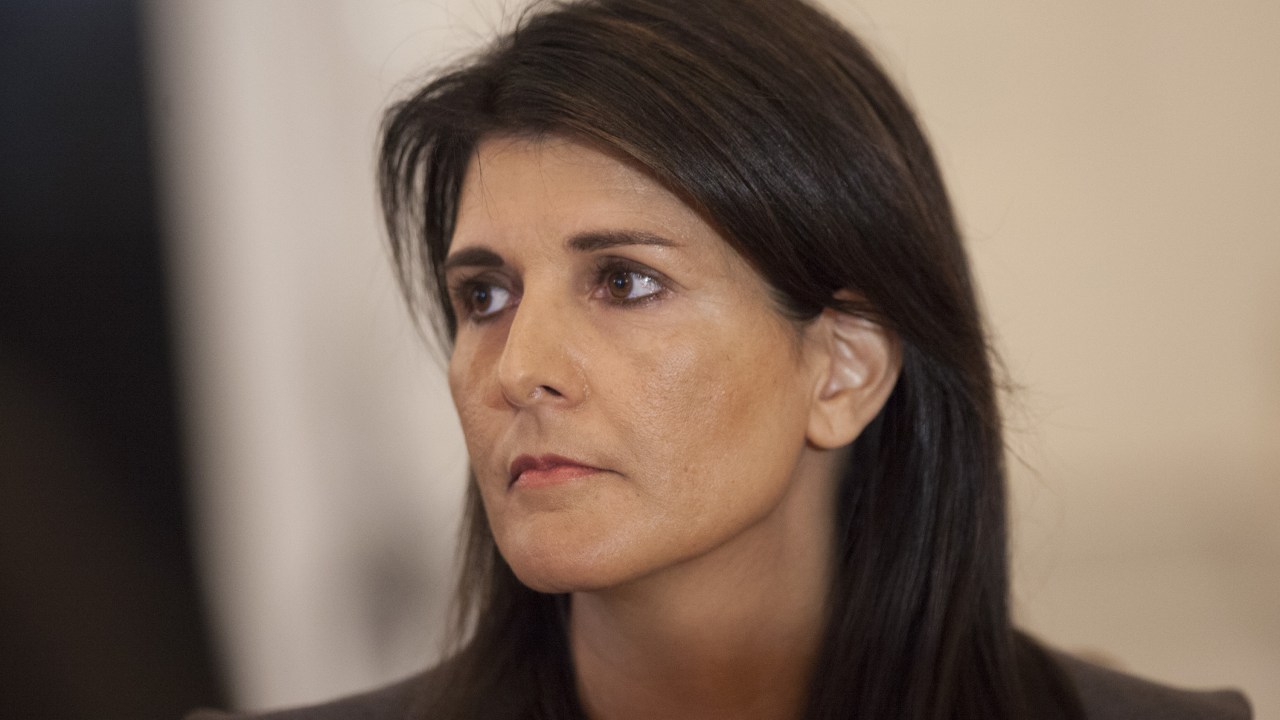 U.S. Ambassador to the United Nations Nikki Haley welcomed U.N. Security Council envoys to Washington, D.C. on Monday — and made sure to include a tour of weapons that the Trump administration says are proof of Iran’s meddling in the war in Yemen. On Twitter, Haley called it “first-hand evidence from the Department of Defense of Iran’s illegal weapons program.”

This isn’t the first time that Haley has tried to highlight the weapons, which are housed at a military hangar at Joint Base Anacostia-Bolling outside of Washington, D.C. In December, she invited reporters to view the weapons and said they are proof that Iran is providing military assistance to the Houthis in Yemen. As Reuters reported at the time, the weapons included the remains of a short-range ballistic missile that was fired from Yemen towards the King Khaled International Airport near Riyadh, Saudi Arabia’s capital, as well as a drone and an anti-tank weapon that the Saudis recovered in Yemen.

“These are Iranian made, these are Iranian sent, and these were Iranian given,” Haley said in December. “You will see us build a coalition to really push back against Iran and what they’re doing.”

There’s just one big problem: The United Nations hasn’t agreed with the Trump administration’s assessment. As ThinkProgress reported during Haley’s last photo op with the weapons, U.N. officials are still looking into who created the missiles.

U.S. Ambassador to the U.N. Nikki Haley speaks in front recovered segments of an Iranian rocket during a press briefing at Joint Base Anacostia-Bolling, Thursday, Dec. 14, 2017, in Washington. Haley says “undeniable” evidence proves Iran is violating international law by funneling missiles to Houthi rebels in Yemen. Haley unveiled recently declassified evidence including segments of missiles launched at Saudi Arabia from Houthi-controlled territory in Yemen. CREDIT: Cliff Owen/AP Photo.
All the problems with Nikki Haley’s speech on Iran
Foreign Policy reported in December a U.N. panel of experts that reviewed the missile fragments concluded that it “has no evidence as to the identity of the broker or supplier.

Saudi Arabia has been leading a multinational coalition bombing Yemen since March 2015 in hopes of reinstating the government of President Abed Rabbo Mansour Hadi, who was ousted by the Houthi movement earlier that year. The coalition has received significant aid from the United States, and U.S.-made bombs have killed civilians in Yemen in hospitals and in their homes. The constant airstrikes, and a Saudi blockade on Yemen since the missile launched towards Riyadh International Airport in November, have left 8.4 million people in Yemen “a step away from famine,” according to Jamie McGoldrick, the UN’s humanitarian coordinator for Yemen. Still, the Trump administration’s focus is on whether Iran is offering military assistance to the Houthis.

Haley’s tour on Monday may be proving fruitful. U.K. Ambassador to the United Nations Johnathan Allen seemed to agree with Haley’s argument, noting on Twitter that there was “clear evidence” that the missiles used by the Houthis in Yemen came from Iran.

Reuters reported on Monday that the Trump administration is seeking to “boost its case for United Nations action against Iran” during the U.N. Security Council envoys’ visit. 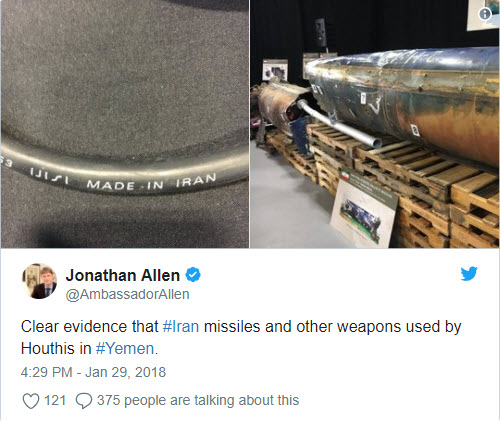 Trump has stocked his cabinet with several anti-Iran hawks and repeatedly threatened to withdraw from the 2015 nuclear agreement with Iran and the P5+1 (United States, United Kingdom, France, China, Russia, and Germany). Earlier this month, Trump said that he will not renew waivers for Iran sanctions another time, jeopardizing the future of the agreement. He hasn’t been getting much support from other partners to the agreement, who have been trying to urge the United States to remain part of the deal. The International Atomic Energy Agency (IAEA) has confirmed that Iran is in complying with the nuclear agreement.

The agreement limited Iran’s nuclear program in exchange for sanctions relief, but it did not address the issue of Iran testing or developing ballistic missiles. By arguing that Iran provided missiles to the Houthis in Yemen — again, something the United Nations hasn’t confirmed — Haley is instead leading a push against Iran on grounds of violations of U.N. Security Council Resolutions 2216 and 2231. It’s easy to confuse this, and Republicans have already done so in the past in order to argue against the nuclear agreement.

The envoys also visited the Holocaust Museum Monday morning and later joined Trump for lunch at the White House on Monday, along with Haley and U.S. Secretary of State Rex Tillerson. The president told reporters that they would discuss a “range of security challenges including the de-nuking of North Korea very importantly, countering Iran’s destabilizing activities in the Middle East, ending the Syrian conflict and confronting terrorism.”