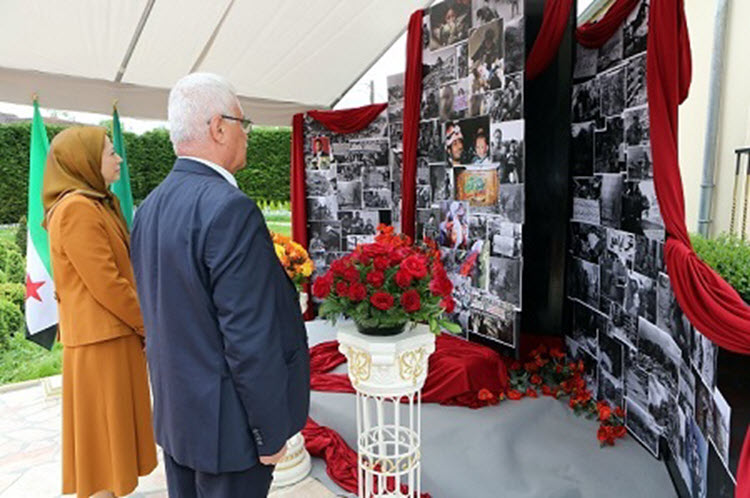 Opposition leaders for Syria and Iran met at the National Council of Resistance of Iran’s (NCRI) office in Paris on May 12, 2016 to pay tribute to Syrian martyrs and the people of Aleppo.

George Sabra, deputy chair of the negotiating team of the National Coalition for Syrian Revolutionary and Opposition Forces and a leader of the Democratic People’s Party of Syria, and Maryam Rajavi, President-elect of the Iranian Resistance, laid down flowers at a memorial to Syrian martyrs.

Rajavi stated that the Iranian regime has suffered heavy setbacks in recent months including IRGC and Iranian backed Militia in Aleppo. She said that the regime is doomed to defeat at the hands of the Syrian people and the Revolution.

Sabra said that both opposition forces face a similar battle: to overthrow a terrorist regime whether it is in Damascus or Tehran. He praised the struggles of the People’s Mojahedin Organization of Iran (PMOI or MEK) and the Iranian Resistance against the mullahs’ regime for the lessons they provided to other opposition forces that are confronting tyrannical regimes.

He said: “The goals of the Iranian Resistance and the Syrian Revolution are common, our enemy is common and the battle for freedom and dignity is also a common battle”.

Rajavi added: “The solidarity between the Syrian people and Revolution and the Iranian people and Resistance facilitates and expedites the overthrow of the two dictatorships in Damascus and Tehran and saves numerous lives”.

Sabra went on to discuss the injustices and violence levied against Syrian people by not only their own dictator Bashar Assad but also the Iranian regime. Countless Syrians are starved, killed by chemical weapons or tortured to death. For four years The Assad regime, Iranian Revolutionary Guards (IRGC) and Iranian-backed militias bombed the city of Darayya, near Damascus, and the population has fallen from 400,000 to 8000 people (a drop of 98%). Earlier this month, aid workers were denied access to the city, where citizens are believed to be trapped.

The Syrians remain hopeful of victory over the Assad regime and will not surrender. They are committed to the opposition; during a recent cease-fire, the people of Darayya came out to the streets and chanted, “The people want the overthrow of the (Assad) regime (sic)”. When Sabra contacted the City Council, they told him not to think of them or the blockade but instead to think of the Revolution and the destiny of the people.

Rajavi commended Sabra’s opposition to the Assad dictatorship, assuring him that the Iranian resistance shares in the pain and suffering experienced by the people of Syria. She said that the persistence of Aleppo’s people was heroic; an unforgettable example of resistance, fortitude and determination in the struggle for freedom.

The NCRI representative in France, Dr. Saleh Rajavi, was also present at the meeting.