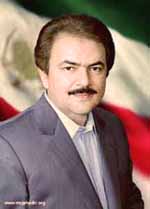 Born in Tabas, Iran in 1947, Massoud Rajavi earned a degree in political science from Tehran University. It was early in his life that he became involved in discussions on religion, history and revolutionary theory, shaping his interpretation of Islam, and thus influencing the views of the People’s Mujahedin of Iran (PMOI), when he became a member in 1967. After joining, Rajavi soon became member of the Central Committee and was considered leadership within the organization.

In 1971, Rajavi, along with all PMOI founders and Central Committee, were arrested and sentenced to death by the secret police and domestic security and intelligence service established by Mohammad Reza Shah Pahlavi; the SAVAK. Rajavi escaped execution thanks to efforts by his brother, Dr. Kazen Rajavi, and several international bodies. He was freed from prison seven years later, as a result of the 1979 revolution against the Muhammad Reza Shah Pahlavi.

Following his release, Massoud Rajavi resumed his role as a leader of the PMOI and spoke for the creation of a democracy, defending the rights of the people of Iranian Kurdistan against dual oppression by the Ayatollah Khomeini and the Shah of Iran. His candidacy for the Iranian presidential election was vetoed by the Khomeini in 1980; the reason being that he had opposed the national referendum on Iran’s new constitution, which proposed a theocratic government.

Following defeat, Rajavi’s attention was turned to the creation of another organization that pulled together political organizations in opposition to the regime. He announced the National Council of Resistance of Iran (NCRI) on July 29, 1981. Meant as a democratic alternative to the religious, terrorist dictatorship, members of the United States Congress signed a statement in support of the council in 1992, stating:

“…the time has come for the free world to form a common front against fundamentalism with those fighting for peace and democracy against the Iranian regime. In announcing a specific program and determining responsible policies vis-a-vis recent international developments, the National Council of Resistance, led by Mr. Massoud Rajavi, has demonstrated that it is determined and able to contribute to peace and stability in this sensitive region….”

Massoud Rajavi’s efforts have since been concentrated on the Council, and his trusted handling of NCRI affairs led to the development of this council to the longest lasting democratic formation of opposition groups and personalities, that later elected Maryam Rajavi, as the future President of Iran in August 1993.