Stop Fundamentalism – Hunger strike in Washington, London, Ottawa, Berlin, The Hague and Stockholm and also Ashraf in Iraq continue, calling for the release of 36 Iranian abductees from Camp Ashraf by Iraqi forces. 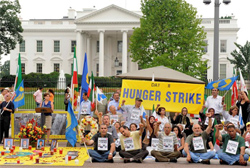 Camp Ashraf, located in Iraq near Baghdad, was attacked on June 28, 2009 by the Iraqi forces as Al-Maliki’s government tried to win favors from the Iranian regime by cracking down on its opposition.  11 camp residents were killed and over 500 wounded as the result of the attack and 36 were abducted by Iraqi forces.

The residents of the camp are all Iranian exiles who have left their country fleeing persecution by the Iranian ruling government.  They form the largest Iranian opposition movement in exile, seeking overthrow of the mullah’s in Tehran.

When United stated and the coalition forces entered Iraq, they reached an agreement with the camp residents for protection in place of disarmament of the camp.  The camp resident were then put under the protection of Geneva Conventions as protected 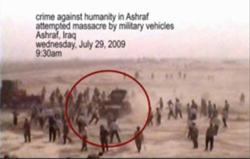 persons since they were not a party to the war and were considered civilians.

United States released the protection of the camp to Iraqi forces taking the role of a simple observer.  This was met with objections from the camp residents reasoning that Iraqis would sell them to the Iranian regime and that would cause disaster.

On June 28 Iraqis attacked the unarmed camp residents while US forces stood aside watching.

Iraqis took 36 camp members into custody and although a local court subsequently ruled that they are not guilty and should be released, they continue to be held in prison.

All 36 abductees are now in their second month of hunger strike along with many other Iranians in camp Ashraf and also all over the world who demand their release.

The hunger strikers call for the release of 36 abducted residents and also demand that the protection of Ashref be returned into American hands until a United Nations force can be stationed there.  These demands are in-line with the Geneva Conventions.