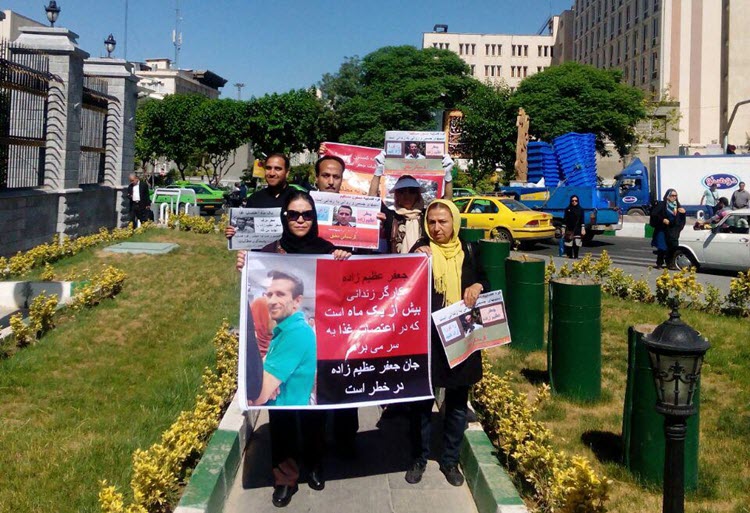 The National Council of Resistance of Iran (NCRI) has reported that the family, friends and supporters of Jafar Azimzadeh have rallied for a second day to demand his freedom. They are gathered outside the Iranian regime’s Majlis (Parliament) in Tehran.

Mr. Azimzadeh, a human rights activist, is on the 33rd day of an indefinite hunger strike in Tehran’s notorious Evin Prison. He is protesting the recent clampdown by the Iranian regime with regards to union activities in the country.

Those protesting included teachers and workers and they held banners reading: “Imprisoned laborer Jafar Azimzadeh has been on hunger strike for over a month”, “The life of Jafar Azimzadeh is in danger” and “We call for urgent attention to Jafar Azimzadeh’s demands.”

On Monday 30th May a similar protest was held by his supporters opposite the Parliament, coinciding with the start of the 105th annual International Labour Conference taking place in Geneva.

At both rallies the protesters criticised the regime judiciary’s indifference to Mr. Azimzadeh’s health which is deteriorating rapidly.

According to the NCRI, on Monday in Sanandaj, western Iran, about 100 of Mr. Azimzadeh’s supporters gathered to protest his unlawful detention.

Mr. Azimzadeh was arrested on 8th November 2015 for “engaging in peaceful and legitimate trade union activities”. He was given a six-year prison sentence which he is currently serving in Ward 8 of Evin Prison.

His health is reportedly getting worse and he has been sent to hospitals on two occasions – each time being sent away without medical treatment.

On 21st May he was taken to hospital for kidney problems. He refused liquid serum and was sent back to prison. A week later the wardens took him to Tehran’s Tajrish Hospital, but was sent back without so much as an ultrasound examination.

Mr. Azimzadeh sent an open letter to the International Labor Organization (ILO) on 27th May. In the letter he criticised the regime for their poor treatment of workers. He, and other workers’ union activists, are calling for the authorities to drop the charge of “gathering and colluding to commit crimes against national security”.

His wife reports that as well as losing a lot of weight he is suffering from low blood pressure, vision loss and kidney problems.

Following the release on bail of fellow political prisoner Ismail Abdi, Secretary General of Iran’s Teachers’ Trade Association (ITTA), Mr. Azimzadeh sent a statement out of prison stating that his hunger strike will continue until authorities meet the demands of the millions of teachers and workers in the country.