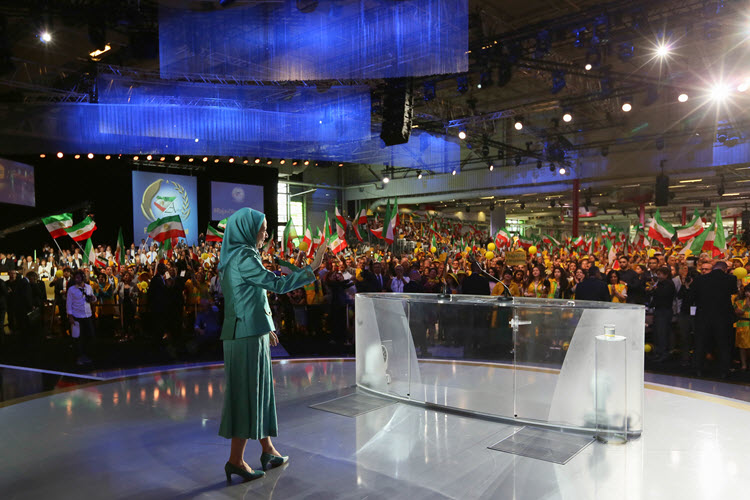 The EU Reporter wrote on Saturday: Addressing a large gathering of Iranian exiles in Paris on 9 July, Free Iran, Iranian Resistance President-elect Maryam Rajavi presented an assessment of the clerical regime’s situation one year after signing the nuclear agreement and said: “The regime’s Supreme Leader Ali Khamenei realized that the survival of his regime was threatened.

In order to rescue the regime, he ultimately decided to retreat with an at least temporary abandonment of the regime’s nuclear weapons programme. Yet the crisis engulfing the regime could not be contained. On the contrary, it was exacerbated, throwing the regime even deeper into the quagmire of the Syrian war.

“Over the past year since the conclusion of the nuclear accord, many of the sanctions were lifted and oil exports were increased. But the resulting revenues fueled the flames of the Syrian war. Even with some of the most encouraging international opportunities and unwarranted western concessions at the regime’s disposal, the economy went deeper into recession.

“The financial and banking system are bankrupt and factories closed down like falling autumn leaves. The faction led by Hashemi Rafsanjani and Hassan Rouhani who viewed the agreement as a climbing ladder to obtain additional share of power fell down head first. Western governments and companies dreaming of a hidden golden opportunity in Iran, were instead faced with the wreckage left by the velayat-e faqih (absolute clerical rule).

“During this period, repression was intensified. Our Kurdish, Arab and Baluchi compatriots and the followers of different faiths were subjected to more suppression and discrimination.  The number of executions rose to two to three times the figure during Mahmoud Ahmadinejad’s period.

“Owing to explosive public discontent and the existence of a capable and vigilant alternative force, the regime finds itself exposed to the danger of being overthrown. It is not without reason that only five days before your major gathering in Paris, the regime ordered the missile attack against Camp Liberty. This was a reaction to Iranians’ reception for this gathering, and a further indication of the regime’s fear of being overthrown.”

Rajavi added: “In the past year, both factions failed to find a way to preserve the regime. It was once again proven that no solution exists within the regime and the solution offered by the National Council of Resistance of Iran, namely the overthrow of the ruling theocracy, is the most viable one. In a word, the Iranian people say the velayat-e faqih regime must be overthrown in its entirety, with all its factions.

“There were many who assumed that the nuclear deal would bring tranquility to the region. But instead it brought barrel bombs and unleashed 70,000 Islamic Revolutionary Guard Corps (IRGC) members on the people of Syria. It resulted in ethnic cleansing of Sunnis by the terrorist Quds Force in Iraq. And it led to the spread of extremism under the banner of Islam in the whole region.

“The mullahs and Daesh (ISIS) are reading from the same script. Both oppose the pristine teachings of Islam. They have a similar modus operandi when it comes to barbarity and savagery. They need to rely on one another to survive. For this reason, so long as the regime’s occupation of Syria, Iraq and Yemen continues, one cannot confront Daesh effectively. Regrettably, the notion of practical coordination with the Iranian regime’s terrorist Quds Force is being justified on the pretext of confronting Daesh. I warn that any silence vis-à-vis such an approach or any collaboration with the mullahs enables them to commit genocide and to infringe upon the national sovereignty of countries in the region.

“US policy on Iran, and consequently on the Middle East, has leaped from one mistake to another: From the notion of empowering bogus moderates within the regime to blacklisting the People’s Mojahedin Organization of Iran (PMOI/MEK), to remaining silent vis-à-vis the 2009 uprising in Iran. This policy has enabled the religious dictatorship, has brought calamity to our nations and other crises to the U.S.

“This policy can be corrected through a solution that is the only effective option, and the most indispensable and attainable solution: the right of the Iranian people to overthrow the religious dictatorship and attain freedom and democracy must be recognized. This solution does not only benefit the Iranian people. It also amounts to a breakthrough for the region and for the world.”