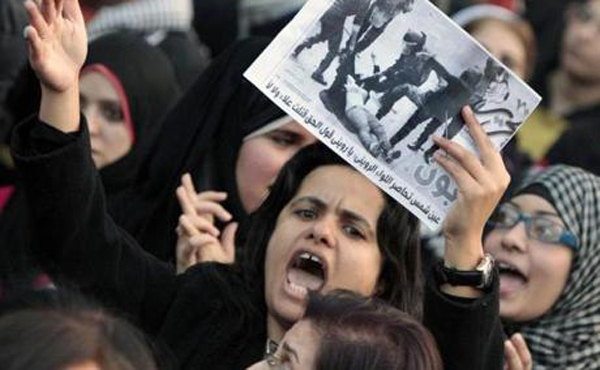 Stop Fundamentalism – Cairo has been the scene of more unrest recently with many Egyptians protesting violent and suppressive actions of the interim military government that has come to power since the fall of this country’s Dictator Hosni Mubarak who resigned earlier this year in February.

Specifically there have been many reports of mistreating, abusive and violent behavior towards Egyptian women by the military soldiers.  A video clip surfaced earlier last week showing an Egyptian women being beaten and subjected to degrading treatment in the streets by soldiers.  The video showed the women being pulled by her hair while another soldier stumped on her chest.

On Tuesday, over 10,000 Egyptian women marched in Cairo’s Tahrir Square protesting crackdown of women by the military government while they were being protected by men who made a human chain surrounding them.    They were carrying pictures of women being abused by soldiers.

The ruling military council issued a rare apology following the protest after many days of dismissing the significance of the issue. The council expressed “deep regret to the great women of Egypt” highlighting their given right to protest and participate in political process of the country.