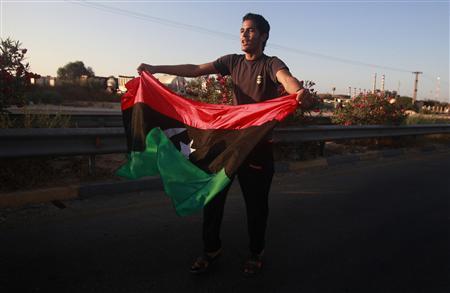 According to Reuters the Libyan rebels have managed to push Gaddafi fighters back 25 kilometers of Tripoli.

A Rebel official, Mustapha Abd El Jalil, confirmed reports of Gaddafi’s sun’s arrest. “We have given instructions to treat him well so that he can face trial,” he added.

Some observers in Tripoli report of barricades being setup in some areas while Gaddafi is calling on his supporters to resist.  Some reports say weapons and ammunitions have been distributed among Gaddafi loyalist.

The Washington Post reported that rebel fighters have reached the Tripoli on Sunday and dissidents claim they are in control of several city neighborhoods.

Rebel leaders in Tripoli said Libyan leader Moammar Gaddafi’s compound was effectively surrounded, the rebel flag is now flying from many buildings across the capital and that the opposition is now only waiting for rebel reinforcements to arrive before beginning a final assault.