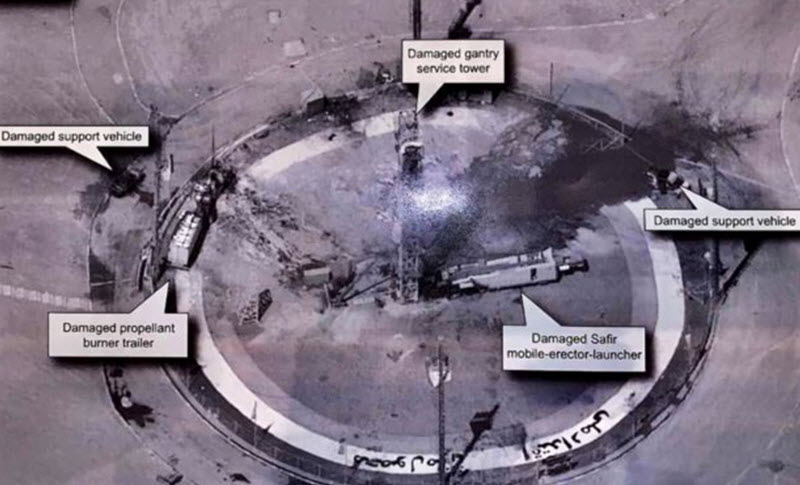 Iran has failed to launch a satellite for the third time this year, according to satellite images taken Thursday.

The images, taken by the WorldView-2 satellite, appear to show that a rocket exploded at the Imam Khomeini Space Centre, in Iran’s Semnan province, which was recently preparing for a satellite launch.

The pictures show plumes of grey and black smoke coming from the launch pad, with half of the freshly applied paint burnt off. Water runoff can also be seen on the pad, likely the result of trying to extinguish the blaze. There are a number of vehicles parked nearby.

David Schmerler, a senior research associate at the Middlebury Institute of International Studies, said: “Whatever happened there, it blew up and you’re looking at the smouldering remains of what used to be there.”

He said the images suggest that the rocket either exploded during ignition or crashed back down on the pad, shortly after liftoff.

Iranian state media and officials have not acknowledged the incident.

Back in July, Mohammad Javad Azari Jahromi, Iran’s Minister for Information and Communications Technology said that Tehran planned three more launches in 2019; two for satellites that do remote-sensing work and one that handles communications.

It is believed that the telecommunication satellite, reportedly called Nahid-1 (Venus-1), is the one that they tried to launch this week. It was set to be in a low orbit around the Earth for two-and-a-half months and was supposed to have Iran’s first foldable solar panels.

On August 13, Jahromi said the Nahid-1 was ready for delivery to Iran’s Defense Ministry, which indicated that a launch date was imminent, especially because Iran often inaugurates new projects during its National Week of Government, which began on August 24.

On Thursday, before the launch, Iran’s Defense Minister General Amir Hatami said that Iran’s satellite activities were “being done in a transparent way” and that upon “successful results” Iran would share the “good news”.

Iran has often downplayed or not announced failed launches in the past.

Since the start of 2019, Iran has failed to launch the Payam and Doosti satellites in January and February respectively, while an unrelated fire at the Imam Khomeini Space Center killed three researchers in February.

The US says that such launches defy the UN Security Council resolution that enshrines the nuclear deal and calls on Iran not to undertake any activity related to ballistic missiles capable of delivering nuclear weapons.