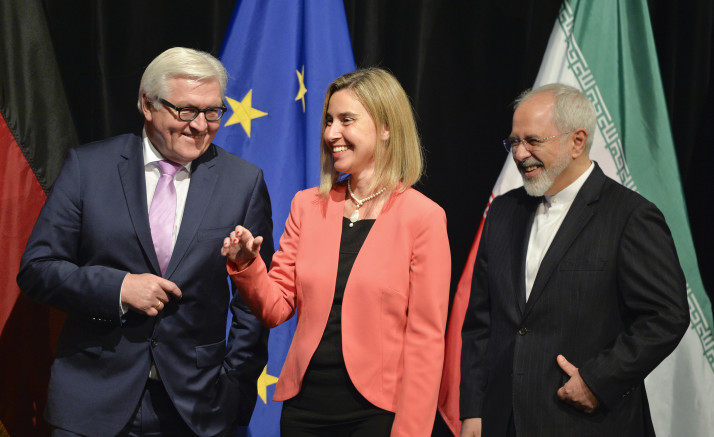 by Navid  Felker
The Iran Lobby is desperate to save the 2015 nuclear deal before Donald Trump makes his final decision about it on May 12, so it’s pulling out all the stops.
Its latest line of attack is an op-ed from former Iranian regime nuclear official Seyed Hossein Mousavian in Reuters, where he attempts to play down the ruckus caused on Monday by Israeli prime minister Benjamin Netanyahu’s press conference.

During the press conference, Netanyahu revealed that the Iranian Regime had been lying about its nuclear programme. This was not so much a revelation, as a reminder though, because the Iranian Resistance actually revealed that to the West back in 2002. Still, it was a timely reminder that the Regime shouldn’t be trusted, ahead of Trump’s decision.

Mousavian goes through the Iran Lobby’s key talking points about the press conference, including how this was already known about, that Iran was in compliance with the nuclear deal, and that the US was heading to war with Iran.
Obviously, the first one is true, but the next two points are utter lies. Iran is not in compliance with the deal and there is plenty of evidence from the Iranian Resistance and the UN to prove it. Also, the US is seeking to put economic sanctions on Iran and the Regime would have to be stupid to hit back with military power.

Then Mousavian writes that Trump’s “bullying” approach to Iran will not work, because Iran doesn’t concede to pressure.
He wrote: “I know from firsthand experience that Tehran responds to pressure by doing everything it can to produce leverage for itself. The modus operandi of Iranian leaders when it comes to addressing pressure is to become inflexible, steadfast and retaliatory.”
And then the truth slips in. Mousavian accidentally reveals that the mullahs are inflexible and retaliatory. The only trouble is that’s not a response to pressure, but their general reaction to anything. The mullahs pretended to moderate during the last round on crippling sanctions before the 2015 nuclear deal was signed, but in reality they have never stopped trying to build their Shiite empire of extremism in the Middle East.

The Iran Lobby are also wrong when they say that the US will start a full-blown war with Iran. For one thing, the Iranian Regime is already farther down that path than the US and for another the appeasement policies towards the Regime have actually made things worse.
The reality is that economic sanctions brought Iran to the negotiating table in the first place and they can bring Iran to its knees again. And now, the Iranian people, who are participating in a months-long nationwide uprising against the Regime, can help take the mullahs down.