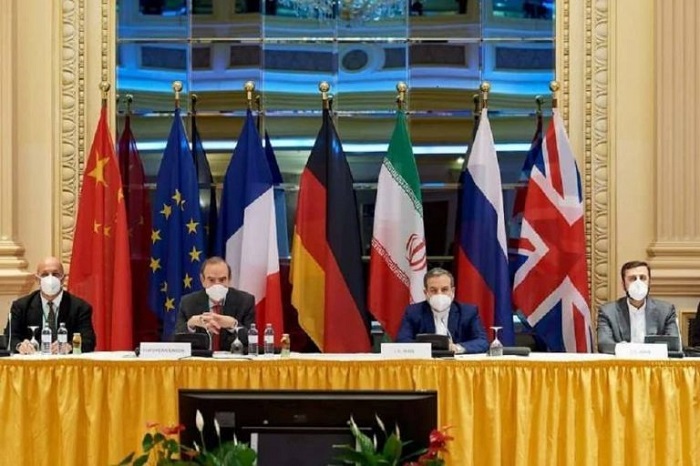 The “anniversary of the Iran nuclear deal” was celebrated on Wednesday. Six rounds of talks in Vienna to resurrect the Joint Comprehensive Plan of Action or JCPOA have already taken place, but little progress has been made toward resolving outstanding issues, and US Special Envoy for Iran Rob Malley admitted that the process appears to have hit a roadblock, telling CNN that it is unclear when Iran will be “ready to go back.”

Throughout the Vienna talks, the Iranian government has continued to raise its nuclear provocations, and the outgoing Rouhani administration appears to have made a concentrated effort to support the transition to a more hard-line administration.

The ultimate example of this came on Wednesday when Rouhani boasted to state-run media about the Iranian regime’s ability to enrich uranium to 90 percent fissile purity, which is needed for the construction of nuke heads.

Despite the fact that the JCPOA required the disposal of higher-enriched stockpiles and allegedly limited further enrichment to 3.67 percent, many questioned the agreement’s enforcement mechanism and the limitations’ long-term viability.

The fundamental worries were reaffirmed after the United States withdrew from the deal in 2018, and Iranian nuclear facilities were capable of resuming their earlier levels of enrichment considerably faster than the pact’s supporters had predicted.

Iran had accumulated more than 2.4 kg of 60-percent enriched uranium, as well as a similar amount of uranium metal, a substance with almost no purpose other than as a vital component in the core of a nuclear bomb, according to the International Atomic Energy Agency in early 2021.

Hassan Rouhani, the regime’s president, challenged Western opponents on Wednesday, saying that Iran “can do anything in the peaceful path,” including enriching uranium to 90% purity. Despite the fact that this level is clearly and solely required for nuclear weapons, Rouhani attempted to imply that it might one day be required for a reactor. “We have no problem and we are able” in that case, he stressed.

Nuclear power generation is a dubious justification for such threats, and Rouhani’s remarks will undoubtedly feed criticism of Western approaches to Iran’s nuclear program.

Many of these criticisms were already conveyed to a large international audience on Sunday when many speakers on the second day of the Free Iran World Summit focused on Iran’s nuclear threats and perceived shortcomings in the American and European responses.

Maryam Rajavi, the president-elect of the NCRI, said on Sunday that the region’s Supreme Leader Ali Khamenei had “linked his and his regime’s fate to the nuclear program,” adding that “Khamenei is building a bomb and will not stop.”

She also warned Western officials to recognize that “the mullahs only understand the language of firmness and strength” when dealing with the issue.

Mrs. Rajavi remarked of the talks that led to the JCPOA’s original adoption and potential renewal, “Western countries’ interactions with the mullahs’ regime have fed a vicious cycle of deception and appeasement.”

Mrs. Rajavi stated at the Free Iran World Summit that any prospective agreement with the mullahs should not only “completely close down the regime’s bomb-making, enrichment, and nuclear facilities,” but also “oblige the clerical regime to withdraw the Revolutionary Guard Corps from Iraq, Syria, Yemen, Afghanistan, and Lebanon” and “to stop torturing and executing Iranians.”