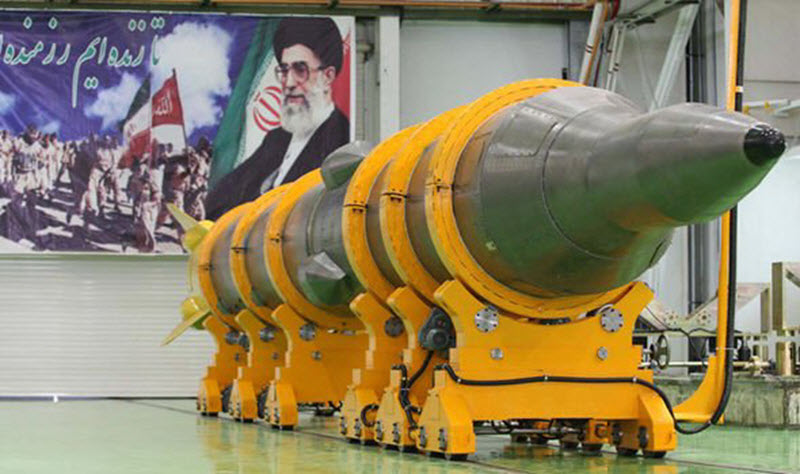 A key provision of the Security Council resolution that endorsed the landmark 2015 Iran nuclear agreement with Western powers, is “not to undertake any activity related to ballistic missiles designed to be capable of delivering nuclear weapons” — but it does not explicitly demand that Tehran do so. The language on ballistic missile launches is somewhat ambiguous and it is unclear if it is permissive or mandatory.

While Iran’s compliance is at issue, the country’s U.N. Mission said in a press release on Tuesday that “all ballistic missile related activities of Iran are in full conformity” with the 2015 Security Council resolution and said that “it is the U.S. that is in absolute violation of the very same resolution” for “its unlawful withdrawal” from the nuclear deal.

Britain, France, and Germany remain part of the nuclear agreement. However, after the closed council meeting, Britain’s U.N. Ambassador Karen Pierce told reporters that members expressed “a lot of concern” about the test launch and called Iran’s actions “inconsistent” with the resolution and “part and parcel of Iran’s destabilizing activity in the region.”

“There is no legitimate reason why Iran should flout the resolution and why their spokesman should pretend that the resolution doesn’t call on them not to develop such missiles,” Pierce said. “If you wanted to demonstrate to the international community that you were a responsible member of it and you were genuinely interested in regional peace and security, these are not the sorts of missiles you would be test launching.” She concluded, “We look again to Iran to cease its destabilizing activity and play a constructive role in this very important region.”

On Saturday, Mike Pompeo, the U.S. Secretary of State, announced that Iran had test-fired a medium-range ballistic missile capable of carrying multiple warheads “which has a range that allows it to strike parts of Europe and anywhere in the Middle East,” which he called a violation of the 2015 resolution. Pompeo warned that Iran’s missile testing and missile proliferation is growing, and called for an immediate halt to “all activities related to ballistic missiles designed to be capable of delivering nuclear weapons.”

That same day, James Mattis, U.S. Defense Secretary, added that “right now the strategic level of threat from Iran is less worldwide than (North) Korea’s, but it is certainly significant regionally, and it could grow beyond that if it’s not dealt with.”

According to Iran’s U.N. Mission, the ballistic missile program is purely defensive and a “deterrent tool against foreign threats.” They say, as well, that the country isn’t violating the resolution. “As a conventional defensive capability, Iran’s ballistic missile program is designed to be exclusively capable of delivering conventional warheads and, as a result, none of Iran’s ballistic missiles are ‘designed to be capable of delivering nuclear weapons,’” the mission said. “Iran has never sought to acquire nuclear weapons and never will in the future.”

Spokesman for the Iranian Opposition, the National Council of Resistance of Iran (NCRI), Hossein Abedini, revealed some very concerning findings that the group published in their paper entitled, “Iran’s Nuclear Core: Uninspected Military Sites Vital to the Nuclear Weapons Program”. He said that the paper illustrates how the Iranian regime has been enriching uranium at five sites for the purpose of developing a nuclear weapon.

“Because of Tehran’s aspirations for a nuclear weapon, the bulk of the regime’s programme has been of a covert military nature,” according to the paper, and, “As a result, formulating an arms control agreement to prohibit the regime’s access to nuclear arms, as per Iran’s Treaty on the Non-Proliferation of Nuclear Weapons (NPT) obligations, has proven a major challenge to the international community.”

The document names the locations where uranium is being enriched: Natanz, Arak, Lashkar-Abad, Shian-Lavisan, and Fordow. The group also claims to have new evidence of four more sites which, “with a high degree of certainty, have been involved in various aspects of the nuclear weapons project.” They include Pazhouheshkadeh at the Parchin military complex in south-east Tehran, Nouri Industrial site at Khojir military complex in south-east Tehran, Hafte Tir site, and Sanjarian site which is close to the Parchin military complex.

In a paper entitled “Iran’s Ballistic Build Up” the group provides details of two more sites — Mojdeh site and the Nour building.

Abedini, who was the victim of a failed assassination attempt in Turkey, explained the significance of his group’s discoveries, “We have exposed the clandestine nuclear sites of the Iranian regime.” He continued, “In 2002 we revealed the enrichment of uranium to a recognised degree as well as the heavy water reactor where they were trying to produce plutonium as the main core of a nuclear device.”

The International Atomic Energy Agency (IAEA) sent its inspectors to visit the sites after the initial revelations exposed by the NCRI, and according to Abedini, “They were very much astonished to see how advanced and sophisticated the nuclear technology of the Iranian regime was.”