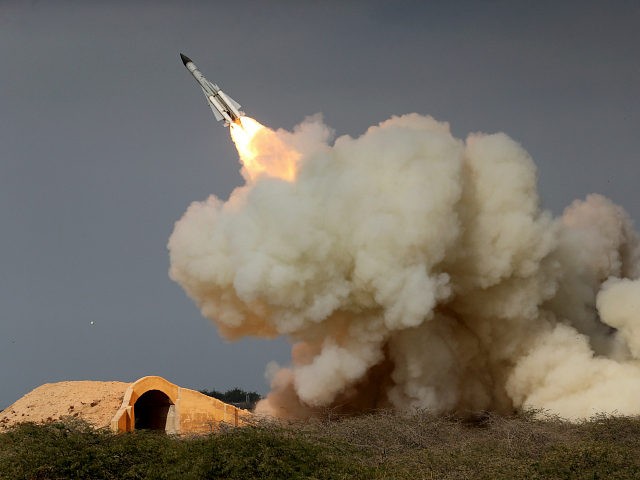 by Navid  Felker
Iran claimed on Monday that if the United States pulls out of the 2015 nuclear deal, formally known as the Joint Comprehensive Plan of Action (JCPOA), then Iran would be able to produce higher enriched uranium within just two days.

Behrouz Kamalvandi, a spokesperson for the Atomic Energy Organisation of Iran, told al-Alam TV: “If America pulls out of the deal … Iran could resume its 20 percent uranium enrichment in less than 48 hours.”

This type of comment is designed to strike fear into the heart of America and perhaps persuade Donald Trump to reconsider his promise to withdraw unless flaws in the JCPOA were fixed, but chances are that Iran already has restarted its nuclear programme.
Let’s not forget that Iran has already broken the nuclear deal through its resistance to inspections and firing of over twenty ballistic missiles– at least 16 of them nuclear-capable- since the deal was signed.
A Defensive Programme?

Iran insists that its ballistic missile program is purely defensive, so why then is it allowing them to fall into the hands of the Houthi rebels in Yemen in spite of a UN arms embargo?

Iran has denied this, even claiming that the United States Ambassador to the United Nations Nikki Haley “fabricated” her evidence, despite evidence from UN experts which show that the Houthis fired Iranian-made ballistic missiles into Saudi Arabia in 2017.
Back in December, Haley invited her UN counterparts to see the charred remains of a short-range ballistic missile that was discovered in Yemen and had originated in Iran. Later that month, an independent UN Security Council panel verified Haley’s claims in a report, which read: “Design characteristics and dimensions of the components inspected by the panel are consistent with those reported for the Iranian designed and manufactured Qiam-1 missile.”

The US is not the only signatory to the JCPOA to have voiced concerns about Iran’s ballistic capabilities. In February, Britain, France, and Germany co-sponsored a UN resolution condemning Iran for supplying the Houthis with the missiles, although Russia vetoed this draft, and French Foreign Minister Jean-Yves Le Drian told reporters ahead of his recent trip to Iran, that Iran’s ballistic missiles program worried France “enormously”.

Le Drian also said: “Having such tools is not uniquely defensive, given the distance they can reach.”
That is an important point, especially considering that Iran said in October that it didn’t need to increase the range of its ballistic missiles because they could already reach US forces in the Middle East.