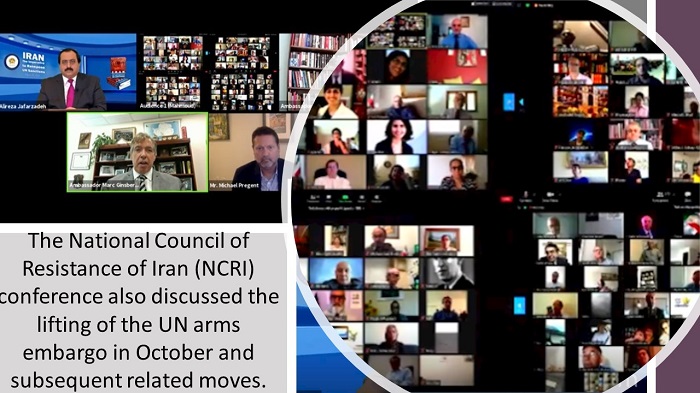 Reimposing sanctions on Iran is an important step in preventing the mullahs from continuing their obsession with a nuclear bomb and supporting terrorist activities from Yemen to Lebanon, according to three U.S. experts at an NCRI sponsored online conference held on 26th August.

The U.S. Government so far has failed to convince the U.N. Security Council of the need to renew the arms embargo on the Iranian regime in light of its continued terrorist and nuclear activities. The embargo is set to be lifted on 18th October 2020 unless a resolution in favor of it being extended is carried.

The online conference organized by the main Iranian opposition, the National Council of Resistance of Iran (NCRI) heard several U.S. based experts on the Iranian arms embargo speak in favor of extending the embargo.

The Deputy Director of the U.S. NCRI Office in Washington, Alireza Jafarzadeh, said that “re-imposing sanctions is a must.” He went on to say that “the book looks at the modus operandi of the regime’s velayat-e faqih system or the absolute rule of the clergy. In addition to the regular army, the regime has the Revolutionary Guards (IRGC) Quds Force, whose sole purpose is state-sponsored terrorism. It manufactures weapons and supplies its proxies with weapons. Providing this regime with arms will be feeding the mayhem created in the region.

A former Special Envoy for Six-Party Talks with North Korea, said “as we look at what is going on in Iran right now, in Iran, one has to have significant empathy for the people going through the pandemic. Ever since we signed the JCPOA with Iran, hoping the unfrozen $50 billion would go to the people of Iran. But the theocracy continued with what we saw in the 1980s, the attacks on the Marines barracks in Beirut. That continues today in Iraq, Yemen, Lebanon, and Syria.

“The Quds Force is perpetrating terrorist acts. The JCPOA was meant mainly, in addition to denuclearization, to move Iran on a path of peaceful transformation. When we look at the nuclear issue, we see up until 2003, Iran was pursuing a nuclear weapons program. Monitors of the International Atomic Energy Agency (IAEA) were having problems accessing facilities. And that situation continues today. They continue to support terrorist proxies, undermining good governance. Terrorist activities continue.”

A senior fellow at Hudson Institute and an expert on Middle East affairs, Mike Pregent, said: “when there was sanctions relief, the people of Iran saw no benefit. Iran used the money to fund terrorism, to buy S300 air defense missile systems from Russia. They went after opposition forces fighting the Assad regime in Syria. Critics say bad behavior began after the U.S. walked away from the deal. No. This behavior existed and accelerated. Iran used the economic benefits of the deal to further destabilize Iraq, Syria, and Yemen, to produce ballistic missiles.

Our allies, and Russian and China, signed on the 2015 nuclear deal to exploit Iran’s economy. It is important for the U.S. to snap back sanctions into place to protect the Iranian people from Chinese imports, from predator Chinese lenders, to prevent the intensification of Iran’s destabilizing activities. Iran is not an economic powerhouse and China and Russia are trying to salvage that.

This regime, in its 40-year history, does not own Iran’s history, culture, what Iranians think about their future, or their lives ahead.”

A former U.S. envoy to Morocco, Ambassador Marc Ginsberg,  said: “what we tend to forget is how many tens of thousands of innocent Iranians have been murdered by this regime to maintain its hold on power. I am struck by the reality of what has taken place since President Trump decided to withdraw from the nuclear agreement. Iran was already violating the JCPOA even before the ink was dry on the nuclear deal. It was creating a secret facility for uranium enrichment.”

“Tehran was banking on governments in Europe and the U.S. to provide it with the means to pursue its objective. The regime wants to cause revolution and conquest to occur in the regime. This is why the leadership has created this concept of the Shiite crescent. Iran further violated the agreement by lifting caps on heavy water and uranium enrichment.”

Reporting by PMOI / MEK IranWashington, D.C., August 26, 2020—It is imperative to restore a full sweep of United…