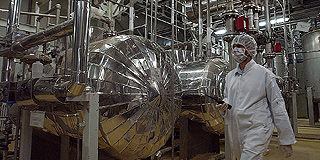 Maryam Rajavi, the President-elect of the National Council of Resistance of Iran says the Iran nuclear agreement with six world powers that is circumventing six UN Security Council resolutions will not close the mullahs’ path to deception and access to nuclear bomb.

Despite many shortages and illegitimate concessions to the mullahs, the nuclear deal struck by P5+1 and the Iranian regime forces Khamenei to retreat and violate the declared redlines he had repeatedly insisted on over the past 12 years, including in recent weeks, said the Iranian Resistance’s President-elect Maryam Rajavi.

Mrs. Rajavi reiterated that circumventing the six UN Security Council resolutions and coming up with an unsigned agreement that is not internationally binding as a treaty, will neither block the mullahs’ path to deception nor their access to the nuclear bomb. However, as the Iranian Resistance has always pointed out, such a small retreat will shatter Khamenei’s hegemony in the regime and undermine the mullahs’ religious fascism in its entirety.

A statement by the NCRI said “any agreement that does not observe and consider the Iranian people’s human rights, will only embolden the regime in its relentless suppression and executions, and trample the nation’s rights, the Universal Declaration of Human Rights and the United Nations Charter.”

Mrs. Rajavi also addressed the people of Iran who have been the prime victims of the ruling religious dictatorship and the majority of whom live under the poverty line while the regime spent billions of dollars of their wealth on its ominous nuclear program for its own survival in power.

Noting Tehran’s extremely fragile and vulnerable conditions of the regime, Mrs. Rajavi stressed: Had the P5+1 been more decisive, the Iranian regime would have no way but to fully retreat and permanently give up its efforts to acquire the nuclear bomb. Specifically, it would have halted all uranium enrichment and shut down its bomb-making projects.

The National Council of Resistance of Iran was the first group to reveal to the world the regime’s nuclear sites in Natanz and Arak in 2002, but since then, the NCRI has exposed dozens of other Iranian nuclear sites and information about the structure and activities of the regime to build a nuclear weapon. Tehran has only acknowledged the existence of each of its nuclear centers after they were irrefutably exposed by the NCRI.

Chronological list of some of the most significant revelations by the NCRI of various secret sites and aspects of the Iranian regime’s nuclear weapons program (partial list):

1. August 2002: NCRI disclosed two secret sites of the regime in Natanz (uranium enrichment) and Arak (heavy water plutonium reactor). Details of the Natanz site including two 25000 square meter salons under the ground were exposed. Exact location of Arak’s site and its secretive nature was explained. After proving the NCRI information was correct with satellite imagery, the IAEA visited Natanz and Arak.

2. February 2003: NCRI exposed that the Iranian regime was testing centrifuges in Abe-Ali site, under the guise of a watch factory named Kalaye Electric Company. Iranian regime changed the building’s entire appearance to hide its true nature. After months of insistence by the IAEA to gain access, when finally the international inspectors managed to visit the site, environmental samples tested by the IAEA later confirmed it to have been a secret nuclear site.

3. May 2003: NCRI disclosed the Shian- Lavizan site and the research conducted there. The map and location of the site were defined. This location was the center of nuclear and biological activities. When the IAEA visited Shian in June 2004, the Iranian regime tried to disguise its purpose, but radioactivity was still found there. The NCRI’s information was proven correct but the regime had given the place a huge face lift.

4. May 2003: Disclosure of the Lashgar Abad site in Karaj and the Nurafza Gostar company. Iranian regime first showed another site to the IAEA visitors in an attempt to show that the NCRI’s claims were not correct, but after two months they were forced to show the true location. Experimenting enrichment using laser was discovered by IAEA visitors in 2004.

5. November 2004: The new technology center (Mojdeh site) and the names of their experts were revealed in an NCRI press conference in Paris. In the conference, the Iranian Resistance revealed the identity of Mohsen Fakhrizadeh, the point man of the regime’s clandestine nuclear program who had been kept secret until then. The IAEA has been insisting to interview Fakhrizadeh for the past few years, but the Iranian regime has not provided access.

6. December 2005: In a press conference in Paris, the NCRI revealed the construction of a series of secret new sites, including one in Qom. Four years later it was established that that site was the clandestine Fordow site, used for enriching uranium.

7. April 2011: The NCRI revealed that a secret site called Taba factory was used for production of centrifuges. The clerical regime initially denied and later confirmed the report.

8. July 2011: The NCRI revealed that the structure of the organization in charge of pursuing the nuclear weapons under the supervision of Mohsen Fakhrizadeh had changed and the new operation was called Organization of Defensive Innovation and Research (SPND). The IAEA confirmed this in its November 2011 report.