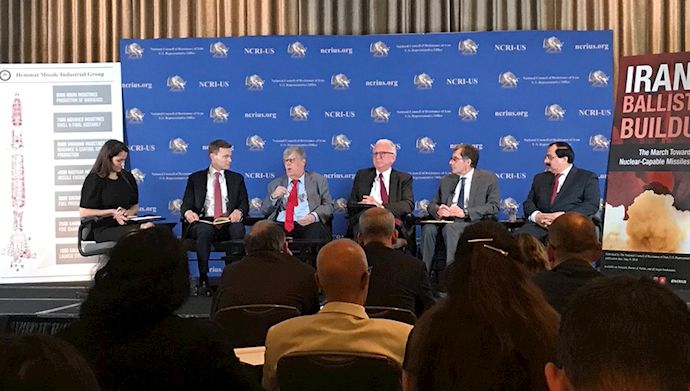 A book that details the growth of ballistic missile program in Iran was released last week by the National Council of Resistance of Iran (NCRI). The NCRI’s principal constituent is the People’s Mojahedin Organization of Iran (PMOI/MEK), whose credibility is proven. They have revealed key details regarding the clerical regime’s nuclear activities and the locations of its secret enrichment sites over many years.

The international community should examine the position put forth by the Iranian Resistance, who maintain that the regime must be approached from a position of strength, with a plan to curb its nuclear ambitions, contain its ballistic missile program, free its political prisoners, and stop its support of terrorism.

According to the Resistance, achievement of these goals is dependent upon regime change. The NCRI’s President-elect, Maryam Rajavi released a statement last week, saying, “Eradicating the clerical regime’s nuclear and terrorism threats means getting rid of the regime in its entirety. A regime based on the principle of velayat-e faqih (absolute rule of the clergy) cannot exist without terrorism, suppression, and weapons of mass destruction.”

While an endorsement of regime change will prove alarming to leadership in Tehran, recent developments in the country underscore many facts highlighted by Mrs. Rajavi. She stated, “Democratic change in Iran is inevitable and a free Iran is within reach.” The turn of the year anti-government protests that spread through major towns and cities in Iran, where people chanted slogans like “death to the dictator” proves her statement.

On June 30th, the annual Iran Freedom gathering will be held in Paris. In the past, this event has drawn at least 100,000 Iranians and their international supporters, along with supporters of the Iranian Resistance from the political, academic, and security establishment of nations throughout Europe, North America, and beyond. Discussions regarding the implications of the nationwide uprising, and subsequent protests, will be explored in detail at the event.

There now exists a clear opportunity for world powers to put their support behind the Iranian Resistance, as Tehran contends with an increasingly restive population. Facilitating a domestically-driven change may resolve all of the issues tied to Iran, without the need for military entanglements in the Middle East.

Attention to the recommendations voiced at the NCRI rally will allow world leaders to understand that foreign nations cannot force a change in Iran’s behavior. However, pressure can be exerted on the clerical regime to leave it at the mercy of its people and their demands for freedom and democracy.

Member of Foreign Affairs Committee of the National Council of Resistance of Iran, Shahin Gobadi, said in an article, “As the international community grapples with questions about the way forward for Iran policy, the least it can do is acknowledge that those demands are legitimate and that the NCRI, as the leading voice for those demands, is legitimate as well.”