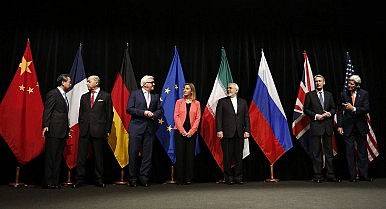 Struan Stevenson, Member of the European Parliament from 1999 to 2014, President of the Parliament’s Delegation for Relations with Iraq from 2009 to 2014, Chair of Friends of a Free Iran Intergroup from 2005 to 2014 and current President of the European Iraqi Freedom Association (EIFA), wrote an article for The Diplomat in which he raises his concerns about the Joint Comprehensive Plan of Action (JCPOA), or the Iran nuclear deal.

The deal which was signed in Vienna on 14th July 2015 was widely promoted by U.S. and EU officials as “a foreign policy breakthrough” despite much of it being “kept under wraps”. Now, a year later, he said, we are starting to see the reality.

He pointed out that last week the Associated Press published a leaked document showing that the deal “will allow Tehran to enrich uranium 11 years after the agreement was implemented and not 15 years as previously announced”. The Iranian regime’s reaction was furious, he said, and they accused the West of violating the agreement by leaking details to the media. Dr Ali Akbar Salehi, President of the Atomic Energy Organization of Iran (AEOI) has said that Iran can return to enriching uranium at a higher capacity if any party violates the nuclear deal.

Stevenson said: “It has now become clear that the deal was quite one-sided, containing page after page of clauses relating to the lifting of sanctions, in return for which we got very little, apart from a few scant paragraphs detailing Iranian cooperation in slowing down its nuclear enrichment process for a period of up to 15 years, which we now know in fact to be much less.”

He added that the Natanz site in Isfahan Province (Iran’s main underground nuclear facility with over 19,000 operational centrifuges) is the only site that has to undergo regular inspections by the International Atomic Energy Agency (IAEA). In the agreement it states that Iran will allow the IAEA access to “relevant buildings at Natanz”. This indicates that “Iran intends to restrict inspections to the bare minimum”, according to Stevenson.

He also highlighted that the regime is untrustworthy and has a history of deception. The Iranian regime previously hid all their nuclear facilities. It is shocking that there is only an inspection carried out at Natanz especially when the deal says that access is prohibited to all military sites – “where most of the on-going nuclear activity is now concentrated”.

Stevenson states that the mullahs have exploited the fact that the West surrendered to almost every Iranian demand. He said this “exposed a level of weakness” that has now permitted the regime to get a huge windfall to continue with their export of terror.

Vladimir Putin has started delivering S-300 surface-to-air missile systems to Iran and North Korea has partnered with the regime in supplying weapons technology. Last week the UN Secretary General Ban Ki-moon criticised Iran’s regional and missile activities saying that the ballistic missile launched by Iran in March was at odds with the U.N. deal and “not consistent with the constructive spirit” of the nuclear agreement.

“Tension is mounting internationally as the flaws of the nuclear deal are repeatedly uncovered and Iran’s aggressive expansionist policy in the Middle East, to cover its internal fragility and weakness, is exposed. Tehran’s knee-jerk reaction to criticism is to accuse the West of violating the agreement and to call for retaliation, as was witnessed in last week’s UN Security Council when France openly criticized the Iranian regime, causing a furious reaction.”

He advised that the U.S. Congress continue to monitor and adopt tough measures obliging Iran to cease creating regional instability, disrupting peace and threatening international security. “The West must not be passive when dealing with Iran’s continuous violations of the nuclear agreement and its aggressive regional interventions, terrorism, and human rights violations,” he said. Hard-hitting sanctions got the mullahs to negotiate in the first place, therefore “we should take a tough line by imposing new sanctions for any further violations,” he added.