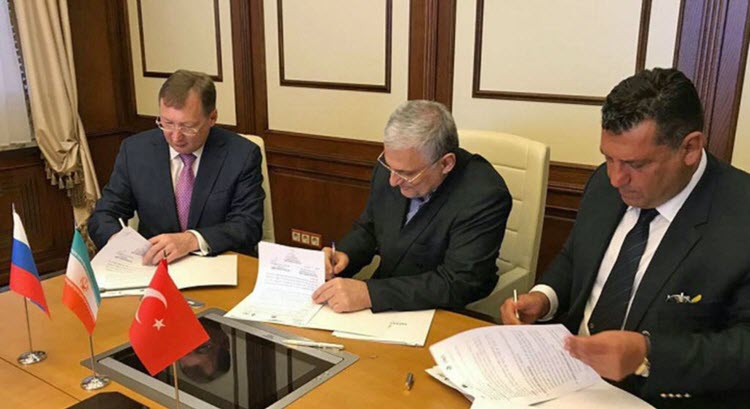 It has been reported by state-run media in Iran that a firm named “Ghadir Investment Company” has manged to sign an investment agreement with “Zarubezhneft” in Russia and “Unit International” in Turkey.

The news agency, Shana, which is affiliated with the Iranian regime’s Ministry of Oil, said an agreement between the three countries was signed on Monday 4th August. The agreement means that joint projects in the oil and gas sector, both inside and outside of Iran, will be initiated.

The report indicated that the consortium will be led by Ghadir Investment Company, but all three have equal stakes and matching investment amounts. It adds that this is the first time any company in Iran has signed a deal with two companies outside Iran for the same project.

The Supreme Leader of Iran Ali Khamenei controls Ghadir Investment Company showing that he personally benefits from the nuclear deal that was signed by Iran and major world powers two years ago. The aim of the nuclear deal was to halt Iran’s nuclear program in exchange for the lifting of sanctions.

The Ministry of Oil in Iran has initiated a study regarding the potential development of numerous oilfields in the country, but handed it over to Ghadir Investment Company earlier this year.

It is one of the largest investment companies in the country. It is owned by seven holding companies and 140 affiliates. It operates a large part of the economy, notably in the construction, mining and oil, gas and petrochemicals sector.

Any private company would find it impossible to be allowed to work on such big oil and gas projects because it is only companies affiliated and controlled by the Iranian regime that can do so. Such benefactors include the IRGC and companies run by government officials.

It was announced in 2013 by the U.S. Treasury Department that Ghadir Investment Company is affiliated with the “Executive Headquarters of Imam Khomeini’s Command”. The Headquarters’ assets are allegedly worth $95 billion and it has approximately two billion dollars in capital. This makes it one of the top 10 largest companies in Iran and it holds around a third of the country’s stock exchange.

It was placed on the US sanctions list four years ago because its purpose is to “produce and control a large amount of capital that is kept out of the official financial records away from the eyes of the Iranian people and international financial regulatory bodies”.