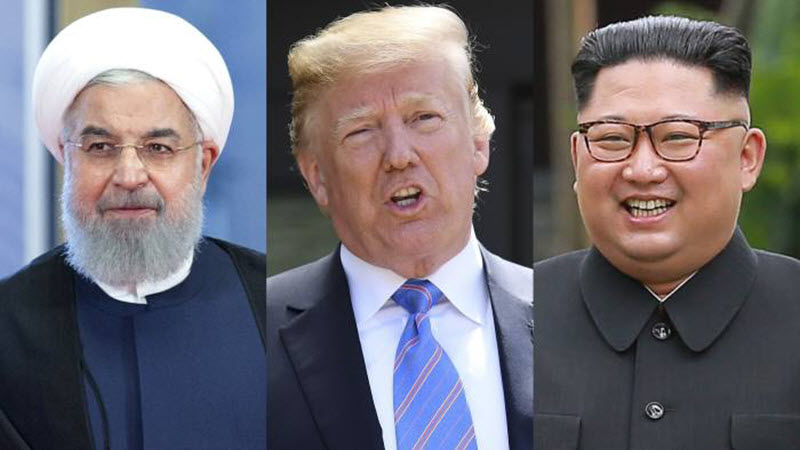 President Donald Trump has been dealing with two major nuclear threats since he took office. However, his approach to each of these nuclear threats have been very different. On one hand, he has been tough on Iran in all senses – rhetoric hardened, and has remained tough, since the very beginning and he has introduced sanctions, more sanctions and will not rule out further sanctions. He has put immense pressure on the Iranian regime and it does not look like it will be easing up any time soon.

His dealings with North Korea, on the other hand, have been very different. Trump and North Korean leader Kim Jong-Un have been in talks for quite some time. However, North Korea has undermined these by carrying out a weapons test at the same time as calling for the removal of Secretary of State Mike Pompeo from negotiations. The tension created by this has been downplayed by the United States.

Iran, like North Korea, has conceded on very little with regards to its nuclear program. The Trump administration has responded to Iran by pulling out of the Joint Comprehensive Plan of Action (JCPOA), or 2015 Iran nuclear deal as it is more commonly known, and it has re-imposed the tough economic sanctions that were lifted several years ago. Further sanctions have been put in place and the U.S. announced that it would not be renewing the waivers on oil imports from Iran, meaning that after 2nd May it expects all foreign countries to have cut their oil purchases from Iran to zero.

With these very different treatments of two separate nuclear threats, there are concerns that the Trump administration will have to soften its stance on Iran given its treatment of North Korea. However, these concerns may be rather cautious because the Trump administration has identified Iran as the number one threat to peace and security in the region and it clearly sees the threats as being at very different levels.

The Iranian regime has not hidden its contempt of the United States and all things American. It has issued a number of direct and indirect threats, even recently, and it has made it very clear that it is does not respond to concessions – many of which were handed out by the Obama administration during the nuclear deal negotiations.

The U.S. is sanctioning and pressuring Iran because it is the only strategy that has had a positive effect so far. Cutting the regime off from the revenues that it uses to spread terror and chaos across the Middle East is one way of forcing the regime to change its behaviour. Nothing else has worked. In fact, every other strategy has made the regime’s belligerence even worse. It is clear that the United States is on the right track.