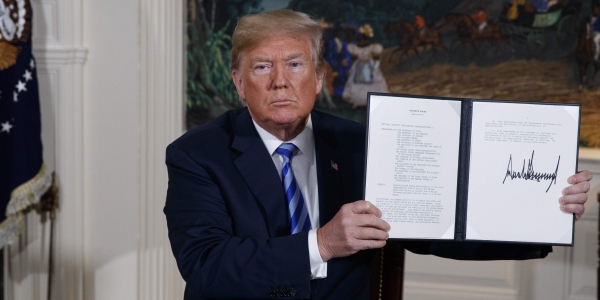 On Tuesday, US President Trump announced that the United States is leaving the 2015 Iran nuclear deal and re-imposing all economic sanctions lifted or waived under the agreement.
In an address from the White House Trump cited the “decaying and rotten structure of the current agreement.” He stated that, “The Iran deal is defective at its core. If we do nothing, we know exactly what will happen. In just a short period of time, the world’s leading state sponsor of terror will be on the cusp of acquiring the world’s most dangerous weapons.”

According to the Treasury Department, the sanctions will be subject to either 90- or 180-day wind-down periods, allowing foreign companies to withdraw their existing business.

National security adviser John Bolton told reporters, “Within the zone of economics covered by the sanctions, no new contracts are permitted.”
Trump described the penalties as “the highest level of economic sanctions.” He added, “If the regime continues its nuclear aspirations, it will have bigger problems than it has ever had before.” As well, any country that helps Iran to obtain nuclear weapons in the future, may also face stringent U.S. sanctions, he warned.

A presidential memorandum to reinstate the sanctions related to the nuclear deal was signed by Trump on camera after his address. The memorandum directed the Treasury and State Departments to “prepare immediately for the re-imposition of all of the U.S. sanctions … to be accomplished as expeditiously as possible and in no case later than 180 days.”
The deal has been under ongoing criticism from the US president regarding its expiring provisions, neglect of Iran’s ballistic missile activity, support for terrorism, and military influence in the region. “The deal lifted crippling economic sanctions on Iran in exchange for very weak limits on the regime’s nuclear activity and no limits at all on its other malign behavior,” Trump said.
He went on to say that the U.S. would be working with allies to secure “a real, comprehensive and lasting solution to the Iranian nuclear threat.”

On Tuesday, in a joint statement, Germany, France, and the U.K. said they would remain party to the deal. They also said they were open to addressing the issues raised by the president, with the nuclear deal “as a base.”
“A long-term framework for Iran’s nuclear program after some of the provisions of the JCPOA expire, after 2025, will have to be defined,” the statement said. “Because our commitment to the security of our allies and partners in the region is unwavering, we must also address in a meaningful way shared concerns about Iran’s ballistic missile program and its destabilizing regional activities.”
Since March of 2016, Trump has vowed to “dismantle the disastrous deal with Iran,” but begrudgingly re-certified the deal to Congress numerous times. In January, he demanded that European allies fix the deal’s “disastrous flaws,” or the U.S. would not waive sanctions again. “This is a last chance,” he said. He cited the deal’s expiring provisions, its weak inspections regime, and its failure to address Tehran’s ballistic missile development.

European leaders negotiated with U.S. officials regarding a potential supplementary agreement, but there was reportedly disagreement related to extending the deal.

The announcement on Tuesday was seen as the “launch of a maximum pressure campaign” aimed at a more comprehensive deal by Mark Dubowitz, the CEO of the Foundation for Defense of Democracies (FDD). “The president has decided to nix, but ‘nix to a fix,’” he told reporters, saying that withdrawal from the deal and the threat of sanctions, could bring Iran back to the negotiating table.
During his April confirmation hearing, Secretary of State Mike Pompeo said, “If there’s no chance that we can fix it, I will recommend to the president that we do our level best to work with our allies to achieve a better outcome and a better deal,” he told lawmakers. “Even after May 12 there is still much diplomatic work to be done.”

Following then-Secretary of State John Kerry’s campaign to encourage foreign economic engagement with Iran, European companies re-entered Iran after implementation of the deal. Europeans businesses will be forced to re-evaluate their interests there, said Behnam Ben Taleblu, a research fellow at FDD. “There is a large decision tree of options that Europe must consider, all which stem from one debate which has the potential to spiral out of control: Adhere to U.S. secondary sanctions or shield Iran and follow EU blocking authorities,” he said.
French president Emmanuel Macron recently met with Trump, and laid out his vision of a so-called “new deal” in an address to Congress. The old deal was included as its first “pillar,” and new provisions were added to address the agreement’s expiration date, Tehran’s influence in the region, and ballistic missile testing. Macron said, “We should not abandon it without having something substantial and more substantial instead.” Macron added, “That’s why France will not leave the JCPOA — because we signed it.”