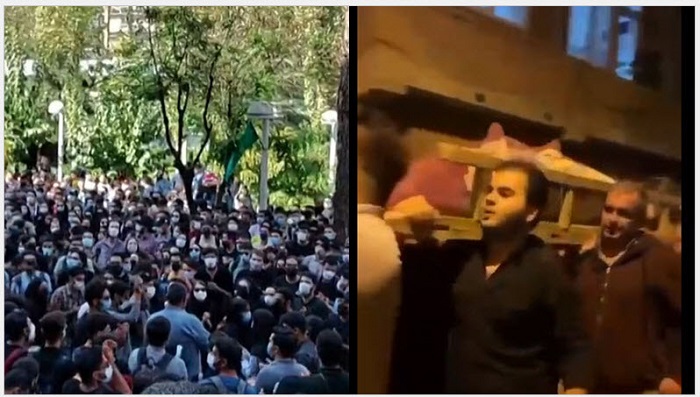 According to the Iranian opposition People’s Mojahedin of Iran (PMOI/MEK), the regime has killed over 450 people, injured tens of thousands, and imprisoned over 25,000. The MEK has released the names of 300 protesters who were killed.

Khorramabad expresses outrage at the regime’s murder of Nika Shakarami

Many citizens also attended the late Nika Shakarami’s commemoration ceremony on October 27. On September 20, she was reportedly apprehended by regime security forces in Tehran. IRGC interrogators tortured her to death, but they claimed she committed suicide by falling from a great height.

Nonetheless, no one believed the regime’s claims or propaganda campaigns. Nika Shakarami’s heinous murder sparked outrage across the country, particularly in her hometown of Khorramabad.

People continued to demonstrate in most Iranian cities on Wednesday, October 26, the 40th day after Mahsa Amini’s death. Demonstrations and people resistance occurred in dozens of regions, with barriers erected on the streets. As the regime late at night confessed in many places, they have lost control.

Massive demonstrations continued in Tehran, from Pounak and Saadat Abad in the northwest to Yusef Abad, Vali Asr, and Northern Kargar in the center, to Yakhchi Abad, Lale Zar, and Pasdaran and Qolhak. There were violent clashes between the people of Sohrevardi and the regime’s suppressive forces.

Students from many universities in Tehran, including Sharif Industrial, National, Science and Technology, Khawaja Nasir, Al-Zahra, and others, took part in the demonstrations. Students at Tehran’s National University, Al-Zahra, and Kuy-e-Daneshgah were attacked with tear gas and birdshot by Basij forces and repressive forces.

There were major clashes in western cities such as Sanandaj, Kamyaran, and Bukan, as well as Qasr Shirin and Saqqez. People set fire to several police stations and patrol vehicles. Several banks in Qasr Shirin were set on fire.

Clashes and protests erupted in the majority of Iran’s major cities, from Isfahan and Tabriz to Mashhad, Rasht, and Ahvaz. According to preliminary data, the uprising occurred last night in over 50 cities.