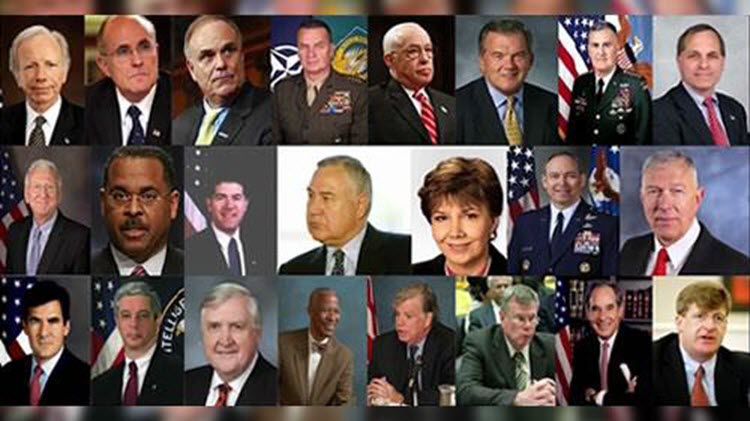 In an unprecedented move, a 23 member bi-partisan group of senior former US officials signed a critical letter and delivered it to President-elect Donald Trump. The letter suggested new policy options regarding the Islamic Republic of Iran and the need for the United States to open up a meaningful channel of communication with the Iranian opposition, namely the coalition, National Council of Resistance of Iran (NCRI), which is led by Maryam Rajavi. Wrote Dr. Majid Rafizadeh, an Iranian-American political scientist, and president of the International American Council wrote in article which was published in ‘alarabiya.net’ on January 20, the articles continues as follows:

Maryam Rajavi is the president-elect of the NCRI and Congressman, Brad Sherman previously commended Rajavi, for her “advocacy of democracy, human and women’s rights in Iran.” In the letter dated Jan. 9, the former officials call for the US government “to establish a dialogue with Iran’s exiled resistance, the National Council of Resistance of Iran.” A copy of the letter dated January 9 can be found here.

This is something that has never been done under any other administration. The letter is signed by senior former US officials including Rudy Giuliani, Joseph Lieberman, General James Jones, Michael Mukasey, Patrick Kennedy, General Hugh Shelton (Hugh Shelton, a former chairman of the Joint Chiefs of Staff under President Bill Clinton), Tom Ridge, Louis Freeh, and Ed Rendell to name a few.

NCRI and preserving US national interests

The letter explains that well-informed and revised policies toward Iran are needed due to the fact that the Islamic Republic has used every opportunity since its establishment to scuttle US foreign policy objectives and damage US national, geopolitical, economic and strategic interests with the assistance of its proxies.

“Iran’s rulers have directly targeted US strategic interests, policies and principles, and those of our allies and friends in the Middle East,” the letter reads, and it adds “To restore American influence and credibility in the world, the United States needs a revised policy.”

The letter addressed the need for President Trump to address the deficiencies of the nuclear agreement as well as to focus on Iran’s human rights violations. These objectives can be more easily achieved if the US cooperates with Iran’s largest opposition group in exile.

Soona Samsami, Representative in Washington for the National Council of Resistance of Iran, said: “The letter by 23 former senior US officials is an appropriate and timely initiative. Its recommendations fill a void that has disabled US policy on Iran for over three decades. Experience has shown that no amount of political or economic concessions to the medieval and totalitarian regime ruling Iran will bring about any change in its behavior.

Attempts to capitalize on moderation within this regime, under whatever pretext or circumstance, are investments in a mirage. The initiative correctly highlights the critical shortcoming in US Iran policy, which has been the reluctance to reach out to the Iranian people and Resistance, who reject the regime in its entirety and call for the establishment of democracy, pluralism, separation of religion and state and a non-nuclear republic in Iran.

More than ever before, the Iranian people are ready for democratic change. The time has come for a new approach by the incoming US administration; to take a new, fresh look at the situation in Iran and consider the realities, long obscured by the Iranian regime’s counterintelligence apparatus and the policy of appeasement pursued by past US administrations.

Standing firm against the epicenter of terrorism and instability in the region and siding with the Iranian people, the organized opposition and their aspirations for a free and democratic Iran are key to regional and global peace and security. Anything less will be a repeat of the failed policies of the past.”

The NCRI calls for a democratic system of governance in Iran, freedom of religion, social justice, rule of law and respecting human rights. The NCRI characterizes the political establishment of the current ruling cleric as authoritarianism and a “religious dictatorship”.

It is believed that the NCRI is currently the largest Iranian oppositional group in exile, and has connections with Iranians on the ground in Iran. Many believe that these give the NCRI the crucial resources to play a very significant role in counterbalancing the power of the ruling ayatollahs, pushing for a democratic system of governance in Iran, and preserving the United States’s national and economic interests. The NCRI has previously revealed Iran’s clandestine uranium enrichment sites.

Every year, the NCRI holds largest gathering of those who advocate for freedom and democracy in Iran. The NCRI’s headquarter is in Paris, but it also has offices in Washington DC and several other major European countries.

For Iranian leaders, the NCRI is a serious threat to their hold on power. They fear foreign governments’ cooperation with the NCRI because it would put significant pressure on the ruling clerics and tip the balance of power against them. Iranian leaders fear that Iranian opposition might inspire the disaffected youth in Iran to protest against the government. Khamenei has repeatedly shown that his main concern is such infiltrations.

Finally, the officials urge Trump to cooperate with Iran’s opposition, as other countries are doing the same – “History aside, no one disputes that the resistance effort since 2001 has been entirely political in nature, including discovering and revealing Iran’s secret nuclear weapons program in 2002 – an act for which President George W. Bush publicly credited the resistance.

It is time to end the fundamentalist regime’s undue influence over US policy and establish a channel of dialogue with the NCRI, as many other governments have done, consistent with the longstanding US diplomatic practice of dialogue with political opposition groups worldwide.”

Iranian leaders fear the soft power of oppositional groups more than the military and hard power of foreign governments.