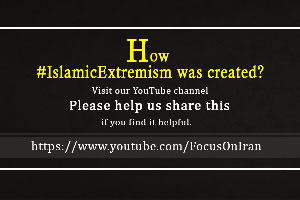 ‘Godfather of Isis’, a slickly produced film explaining that the roots of Islamic Fundamentalism were first sown by the the “so-called Islamic Revolution” in 1979, has received hugely positive comments after being posted and shared on YouTube, Facebook, Twitter and other social media platforms.

In the film, a spokesman for non-profit news site Iran Focus stresses that the only way to rid the world of Isis is to remove the dictators currently in power in Iran.

The spokesman adds: “We are all horrified of seeing Isis behead people, right? But all the gruesome scenes should not make us forget that Iran and its ayatollahs, who came to power in 1979 in the so-called Islamic Revolution, were the first to use these horrific punishments in the 20th and now 21st centuries.

“Dreadful acts of gouging out eyes, literally stoning people to death, amputating hands and feet, raping virgin girls before execution and of course public hangings have unfortunately become a part of the daily lives of the Iranian people.

“But Iran’s atrocities don’t stop here. Their paramilitary forces were the first to splash acid on women’s faces and don’t forget that Iran has the highest execution rate per capita in the world. For example, Iran recently executed 115 people in just two weeks, so it’s quite fair to say that Iran is the Godfather of Isis and set the stage for the rise of Isis.

“So if you consider Islamic Fundamentalism as a snake rattling in the region, wreaking havoc and causing destruction in Iraq, Syria, Lebanon and so forth, Isis is just the tip of its tail. The head lies in Tehran. To rid the region of this snake you have to cut off its head in Tehran.”

After viewing the film, Mel Fairhurst, an Iran Focus reader based in the UK, wrote on the news site’s Facebook page: “Nothing will change in the region until there’s regime change in Iran.

“Iran needs democracy so that it can take its place in the 21st century.”

Another viewer, Bwer Lezan, shared the film and agreed that Isis was “the curse of Khomeini”.