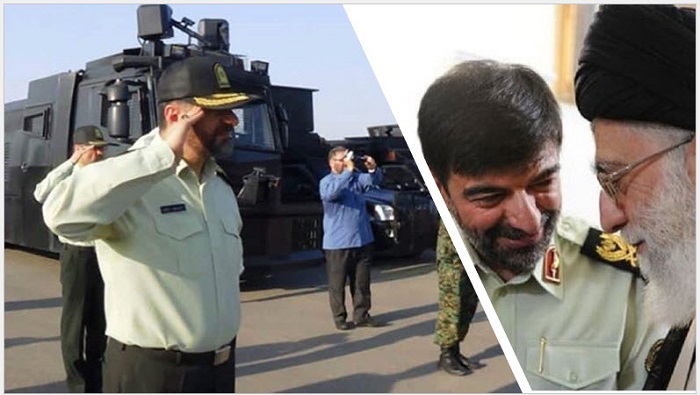 Radan was born in Isfahan in 1964 and enlisted in the Revolutionary Guards (IRGC) Basij paramilitary group as a teenager. He advanced through the IRGC ranks quickly as a result of his ruthless behavior and devotion to the regime. He was elevated to the IRGC’s second Brigadier General rank in 1984. Prior to the end of the Iran-Iraq war, he was transferred to the regime’s State Security Force (SSF), where he held various positions.

The so-called “increasing social security plan,” also known as the creation of the “morality police” or “guidance patrol.” was started and vigorously pursued by Radan while he was Tehran’s SSF chief.  The goal of this plan, which was introduced and put into action in 2005, was to harass Iranian women and young people, who are two of the main forces influencing Iran’s restive society.

Radan threatened to arrest and punish “boys with perverted haircuts.” “These boys will be taken to police stations, their families will be summoned, and after making a pledge to discipline their sons, the families will take their children to a barbershop for a regular haircut,” he said.

“Crush those cretins mercilessly and proceed to eliminate them all.” ” Quash them, and then take the rest to Kahrizak prison to give them what they deserve,” he said in a radio communication with his forces obtained and published by the Iranian Resistance in 2009.

But why was Radan appointed by Khamenei?

The answer can be found on Iranian streets and in the escalating calls for regime change. The nationwide uprising has lasted four months despite the regime’s brutal crackdown, which resulted in the deaths of over 750 protesters, including four executed activists. Many people think that the protests have evolved into a revolution and that time is running out for the current theocracy.