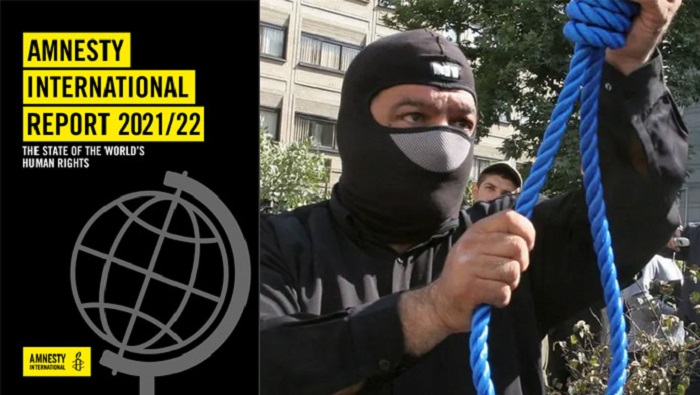 Amnesty International warned in its latest annual report on the state of human rights around the world that Iran’s regime has continued to violate the Iranian people’s basic human rights.

The report details the shocking persecution of protesters, as well as abuses against women, ethnic and religious minorities, prisoner torture and ill-treatment, and the widespread use of the death penalty, “including as a weapon of repression.” Amnesty International also expressed concern that regime officials continue to enjoy impunity for past crimes, such as the massacre of political prisoners in 1988.

The regime’s new president, Ebrahim Raisi, was a key figure in the mass execution of political prisoners in the 1980s, according to Amnesty International. “Instead of being investigated for crimes against humanity related to the mass enforced disappearances and extrajudicial executions of 1988,” the report states, “Ebrahim Raisi, the former head of Iran’s judiciary, rose to the presidency in June, reflecting systemic impunity in Iran.”

The international community is concerned about Iran’s continued violations of human rights. The UN Human Rights Council renewed the mandate of the Special Rapporteur on Iran earlier this month. The regime’s increased crackdown on freedom of expression, association, and assembly, as well as its increased efforts to block access to internet services and secure messaging apps, have raised concerns for Amnesty International.

“Several thousand men, women, and children” were unfairly prosecuted, detained, and interrogated for “exercising their rights to freedom of expression, association, and assembly,” according to Amnesty International’s report. Among them are several relatives of the victims of the 1988 massacre, who are demanding justice and the truth about their loved ones’ criminal executions.

According to Amnesty International, “hundreds of people remained unjustly imprisoned at the end of the year.”

The report also condemned the use of lethal force and live ammunition against peaceful protests, such as those in Baluchistan over the killing of fuel porters and in Isfahan over water shortages.

In addition, the report by Amnesty International highlights the inhumane conditions in Iran’s prisons, such as torture and ill-treatment of inmates.

The report claimed that “torture-tainted ‘confessions’ were routinely broadcast on state television and used to issue convictions,” referring to the regime’s well-known method of extracting confessions through torture.

The report also highlighted the regime’s method of pressuring prisoners by denying them access to basic facilities and healthcare.” At least 24 prisoners died in suspicious circumstances,” according to the report, “including allegations of torture or other ill-treatment, such as denial of adequate medical care.”

Amnesty International is also concerned about Iran’s systemic discrimination against women, which includes laws that legitimize and condone violence against women.

The rights of ethnic and religious minorities in Iran have been a source of concern for Amnesty International. The report stated that “death sentences imposed for vague charges like ‘enmity against God’ continue to disproportionately affect ethnic minorities.”